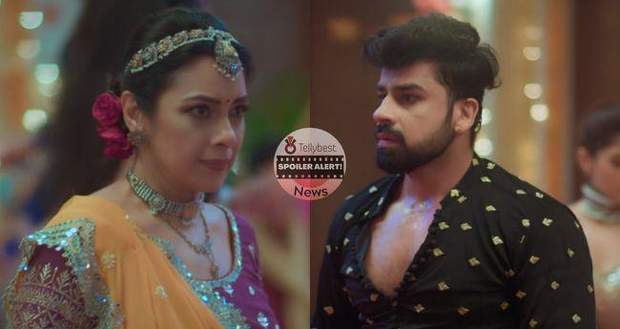 In the upcoming story of Anupama, Anupama will beat Paritosh in dandiya after he appears at the Garba event and starts dancing with Kinjal.

The current track of Anupama revolves around the Navratri celebrations going on in the neighborhood where the entire Shah and Kapadia family tune in.

However, Anupama and Vanraj ban Paritosh from coming to the event as they do not want him near Pari or Anu under any circumstances.

According to the latest twists of Anupama, Paritosh still appears at the Navratri event and tries to become close with Kinjal surprising everyone.

Anupama comes to Kinjal's rescue and switches positions with her to have a dandiya battle with Paritosh.

Both Anupama and Paritosh play dandiya aggressively and knock over each other's dandiya from their hands.

At last, Anupama wins the dandiya challenge after she knocks over both the dandiyas from Paritosh's hands.

Let us see how Anupama who is Paritosh's mother in both anger and determination tackles Paritosh in the upcoming episodes of Anupama.

© Copyright tellybest.com, 2022, 2023. All Rights Reserved. Unauthorized use and/or duplication of any material from tellybest.com without written permission is strictly prohibited.
Cached Saved on: Monday 21st of November 2022 06:37:40 AMCached Disp on: Tuesday 6th of December 2022 01:21:48 PM