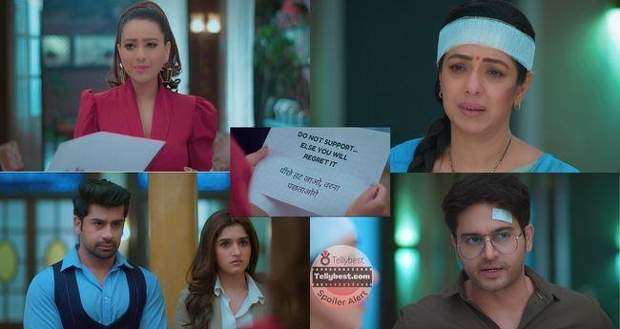 In the upcoming story of Anupama, Anupama's decision to seek justice for Dimple will land all her family members in danger and make them a target.

So far in the story of Anupama, Nirmit has abandoned Dimple after her molestation saying that he feels disgusted to touch her now and he will not be able to face society if he is with Dimple.

As per the spoilers of the serial Anupama, Anupama assures Dimple that she and Anuj are with her and will seek justice for her.

Anupama says if they will not support and stand for Dimple today then others will not come forward for them tomorrow.

However, Leela warns Anupama that her decision will bring disaster to their lives.

In the upcoming twists of the serial, Kavya receives a "Do not support, else you will regret" letter while Kinjal receives the same letter at her work.

On the other hand, Barkha and Anuj received the same letter while Anupama gets surrounded later by some goons.

Let us watch the future episodes of the Anupama serial to know how Anupama overcomes this horrifying experience that lots of people go through in their daily lives and bring justice to Dimple.

© Copyright tellybest.com, 2022, 2023. All Rights Reserved. Unauthorized use and/or duplication of any material from tellybest.com without written permission is strictly prohibited.
Cached Saved on: Wednesday 25th of January 2023 08:54:23 AMCached Disp on: Sunday 5th of February 2023 03:49:12 AM