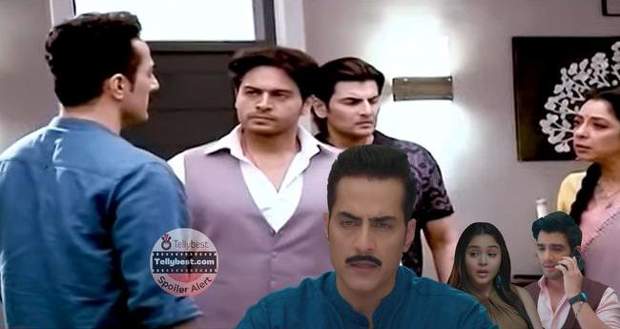 In the upcoming story of the Anupama Serial, Vanraj will shout at Anupama for supporting Adhik over her daughter Pakhi.

So far in the story of the serial, Pakhi and Adhik have done role reversal after marriage.

Earlier when it was expected that Pakhi will suffer in the marriage while Adhik will take advantage of her, the track has been changed where Adhik is a responsible husband while Pakhi is a spoilt brat.

As per the spoilers of the serial Anupama, Vanraj asks Adhik to lower his voice while talking to Pakhi while Adhik tries to explain his side.

Adhik says that he has married Pakhi and not adopted her. He clarifies that he does all the housework as well as the job while Pakhi does nothing.

Later, Adhik goes to Anupama to tell her about the tension building between him and Pakhi.

In the upcoming twists of Anupama, Vanraj comes and scolds Anupama for believing Adhik over her own daughter Pakhi while Anupama says Pakhi might be lying and Adhik is not a stranger but her son-in-law.

Meanwhile, Anuj is stressed to see Adhik in stress as it is impacting his business.

Let us watch the future episodes of Anupama to know how the slowly cracking relationship between Adhik and Pakhi builds walls around other members of the family.

© Copyright tellybest.com, 2022, 2023. All Rights Reserved. Unauthorized use and/or duplication of any material from tellybest.com without written permission is strictly prohibited.
Cached Saved on: Wednesday 25th of January 2023 03:30:29 PMCached Disp on: Wednesday 1st of February 2023 06:59:50 PM