The current story of BALH2 revolves around Ram taunting Priya for inviting the whole family to the trip which was supposed to be a private and intimate journey for the couple.

Now, as per the gossips of Bade Ache Lagte Hain 2, while Ram and Priya and busy arguing about the trip to Alibagh, they get interrupted by Krish's knock on the car's window.

In the recent Bade Ache Lagte Hain 2 serial episodes, Krish has joined Ram's family for dinner where everyone is curious to know about Priya's college days.

Though Ram wants to know the young Priya, he is least interesting to hear anything from Krish who was Priya's college crush.

It is fun for the audience to see Ram gazing at Krish and Priya as they keep talking about each other's personalities during their college days.

Ram's jealous face is the most adorable thing to watch for the viewers while Priya reveals that Krish used to come to the library to impress girls.

Having heard enough about Krish, Ram jumps in and says that he also used to spend time in the library.

Not only the audience but Nandini also witnesses that Ram is feeling left out and jealous to see Priya know so much about Krish and vice versa, according to the spoiler of the Bade Ache Lagte Hain 2 serial.

Let us see whether Priya notices Ram's jealousy towards Krish and her stories, in the upcoming story of the BALH 2 serial. 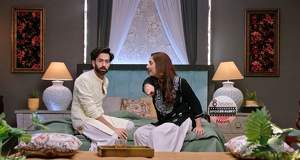 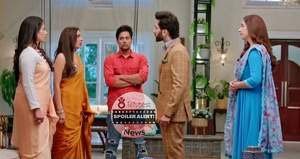