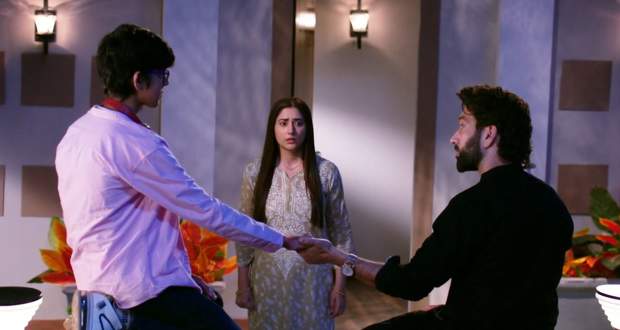 In the recent episodes of BALH2, Mahinder had manipulated Ishaan against his mother, Sara which ended up with him standing on the edge of the terrace.

After Priya shows trust in Ram, he finally finds Ishaan but in a dangerous situation.

Now, as per the story of Bade Ache Lagte Hain 2, Ram convinces Ishaan that jumping off the terrace won't give him a chance to have second thoughts.

To explain this, Ram uses various physics terms and formulas along with a demonstration by throwing his pen out of the terrace.

Priya and the audience are amazed to see Ram's immense knowledge and intellect in Ishaan's favorite subject physics, according to the spoiler of the Bade Ache Lagte Hain 2 serial.

The viewers are as thrilled as Priya to see how Ram connects to Ishaan in no time.

Let us see how will Priya's trust in Ram mends their relationship, in the upcoming story of the BALH 2 serial.

© Copyright tellybest.com, 2022, 2023. All Rights Reserved. Unauthorized use and/or duplication of any material from tellybest.com without written permission is strictly prohibited.
Cached Saved on: Wednesday 25th of January 2023 10:33:04 AMCached Disp on: Sunday 5th of February 2023 12:45:52 PM