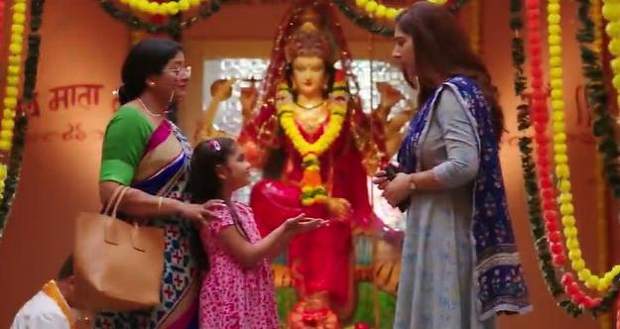 In the upcoming story of Bade Achhe Lagte Hain 2, Pihu will meet Meera in front of Priya at the temple.

So far in the story of the serial, Priya and Ram encounter each other when Priya goes to the temple with Pihu.

Ram does not know about Pihu being Priya’s daughter and ignores Priya due to Nandini.

As per the latest twists of BALH2, Meera will also visit the temple and meet with Pihu when Priya sees them.

Priya will deny talking with Meera directly and will behave coldly toward her so that Pihu does not suspect anything.

When Pihu tells Priya that she calls Meera by Meera maa, Priya will remember Ram.

Pihu will make Priya wear the bangles Ram gifted her in the past despite Priya trying to resist.

At that same moment, Ram will walk toward Priya and Pihu from the other side.

Let us see how Pihu becomes the cupid to bring RaYa together after all these years in Bade Achhe Lagte Hain 2.

© Copyright tellybest.com, 2020, 2021. All Rights Reserved. Unauthorized use and/or duplication of any material from tellybest.com without written permission is strictly prohibited.
Cached Saved on: Sunday 2nd of October 2022 12:35:39 AMCached Disp on: Monday 3rd of October 2022 07:15:38 PM