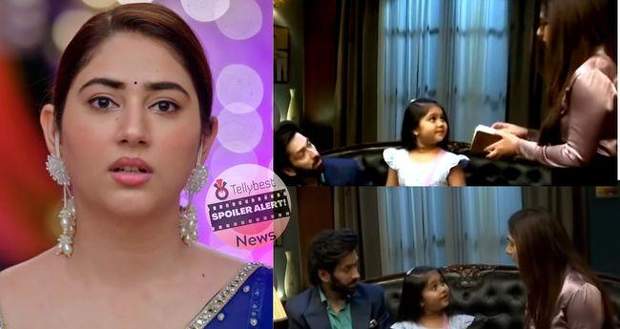 In the upcoming story of Bade Acche Lagte Hai 2, Priya becomes Ram's secretary in front of Pihu and plans his bachelor party.

So far in the story of BALH2, Ram understands Priya's dilemma for hiding Ishaan's truth for five years.

At the same time, Ram vows not to ever leave Priya & Pihu alone at the mercy of this harsh world.

As per the latest spoilers of BALH2, Pihu will tell her parents that God has finally granted her wish of becoming a happy family.

Pihu becomes the boss while Priya agrees to be Pihu's secretary.

Wearing a formal dress and a spectacle, Priya pretends to be Pihu's secretary, asking how & when to plan Ram's upcoming bachelor party.

Ram is shocked at Priya's nonchalance while Pihu asks Priya in her innocence what a bachelor party is.

Let us see if this is just a joke to make Pihu laugh or an indication by the writers for Ram and Priya's remarriage in future episodes of BALH2.

© Copyright tellybest.com, 2022, 2023. All Rights Reserved. Unauthorized use and/or duplication of any material from tellybest.com without written permission is strictly prohibited.
Cached Saved on: Monday 21st of November 2022 07:22:59 AMCached Disp on: Wednesday 7th of December 2022 04:33:54 PM