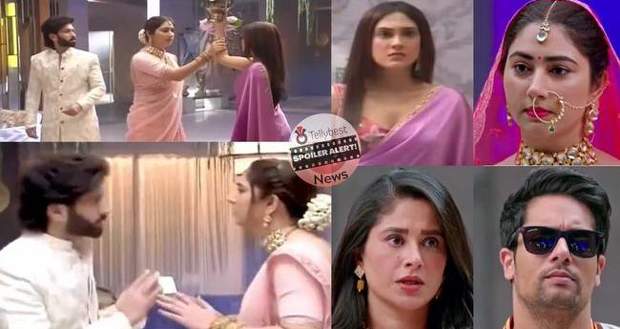 So far in the story of BALH 2, RaYa's wedding gets finalized.

However, Priya and Pihu go missing as Nandini hands a letter to Ram undersigned by Pihu, stating she and Priya are going away since they are the reason for Ram's isolation from Nandini.

According to the latest spoilers of BALH2, Vedika kidnaps both Pihu & Priya so RaYa's wedding cannot happen.

However, after Priya wakes up, she uses Vedika's phone secretly and calls Mr. Kapoor who listens to both their arguments on call.

In the future story of BALH2, Vedika will try to harm Priya by throwing a flower vase at her but Priya will slap her back twice, first for betraying Ram's trust & second, for hurting Pihu.

Nandini will watch all of this, scared that she will be the one to go to jail next.

The question is, will Ram still be blinded by his love for Nandini?

Let us see how Priya unravels Nandini & Shubham's secret next in future episodes of Bade Acche Lagte Hai 2 after slapping Vedika and sending her to jail.

© Copyright tellybest.com, 2022, 2023. All Rights Reserved. Unauthorized use and/or duplication of any material from tellybest.com without written permission is strictly prohibited.
Cached Saved on: Monday 21st of November 2022 03:57:21 PMCached Disp on: Wednesday 7th of December 2022 11:14:53 AM