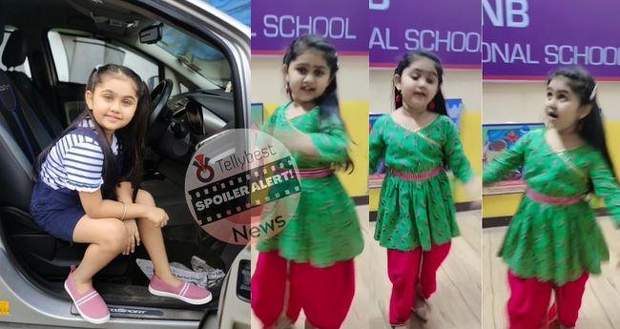 BALH2: Upcoming Story! Pihu Gets Ready To Do Garba!

In the upcoming story of Bade Acche Lagte Hai 2, Pihu is ready to take part in Garba!

The current track of BALH2 revolves around Priya and Ram deciding the next steps regarding Pihu's education and they both choose to get her admitted to one of the top schools in Mumbai.

According to the latest spoilers of BALH2, Pihu takes admission to a school and participates in a Garba competition.

Wearing a traditional Gujarati outfit, Pihu does the Garba, impressing both Ram & Priya with her amazing moves.

As per the latest gossip of BALH2, upon seeing Pihu do the Garba, Ram will tease Priya by stating that his daughter can dance better than her mother.

Let us see how Pihu's Garba dance and future education brings Ram & Priya closer to each other in future episodes of Bade Acche Lagte Hai 2.

© Copyright tellybest.com, 2022, 2023. All Rights Reserved. Unauthorized use and/or duplication of any material from tellybest.com without written permission is strictly prohibited.
Cached Saved on: Monday 21st of November 2022 07:33:04 PMCached Disp on: Tuesday 6th of December 2022 01:37:07 PM