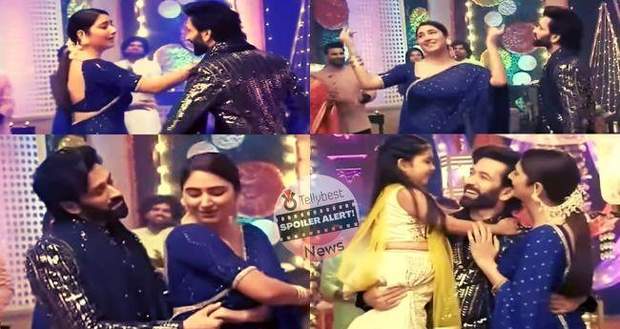 In the upcoming story of Bade Acche Lagte Hai 2, Ram & Priya will become the next SRK & Kajol from the movie "Kabhi Khushi, Kabhie Gham".

So far in the story of BALH2, the judge gives Ram & Priya time to reconcile their differences to give the best parenting to Pihu.

On the other hand, Vedika gets exposed in front of Ram after which she threatens RaYa that they will never be together.

According to the latest spoilers of BALH2, Ram fakes an accident and organizes a surprise dance party on the occasion of Diwali for Priya.

After promising Priya never to leave her or Pihu ever alone, Ram expresses his love for Priya by dancing to the song "Bole Chudiya".

Priya will join Ram as Kajol who is having his SRK moment in full swag & style.

Spreading his arms just like a hero, Ram will twirl Priya around as she gets pressed against his chest.

As per the latest gossip of BALH2, Pihu will have a blast celebrating her first Diwali with both the parents along with Brinda screaming, "RaYa is back!".

Let us see how RaYa's public display of affection sends a threatening tremor down Nandini & Vedika's spines in future episodes of BALH2.

© Copyright tellybest.com, 2022, 2023. All Rights Reserved. Unauthorized use and/or duplication of any material from tellybest.com without written permission is strictly prohibited.
Cached Saved on: Monday 21st of November 2022 07:28:37 AMCached Disp on: Sunday 4th of December 2022 11:41:21 PM