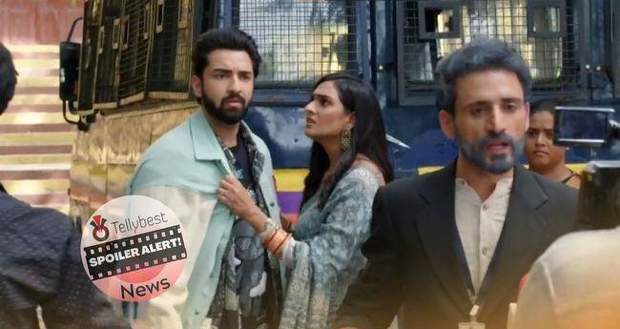 In the upcoming story of Bhagyalakshmi, Reporter Uday will try to instigate Lakshmi to answer his questions by quizzing her.

So far in the track of Bhagyalakshmi, Malishka is instigating Uday to report negative news about Lakshmi through her tactics such as posing as Neelam on the call, making Lakshmi seem like the culprit in the interviews, and other things.

Meanwhile, Rishi, Virendra, and his lawyer are doubtful of Chef Mukesh and are planning to frame him to get some time from the court.

Now as per the spoiler of the Bhagyalaxmi serial, on the day of the hearing, Rishi comes with Lakshmi and helps her out of the police van while the reporters gather to question her.

Uday starts quizzing Lakshmi and asks her if she’s going to accept her crimes as two of the guests are still serious which makes Rishi angry and he lounges at him but gets stopped by Lakshmi.

In the upcoming episodes, we will see a mysterious criminal coming to the same court as Lakshmi which will tense everyone.

Let's find out who this mysterious criminal is in the future episodes of the Bhagyalakshmi serial.

© Copyright tellybest.com, 2020, 2021. All Rights Reserved. Unauthorized use and/or duplication of any material from tellybest.com without written permission is strictly prohibited.
Cached Saved on: Sunday 2nd of October 2022 09:31:44 AMCached Disp on: Wednesday 5th of October 2022 04:28:21 PM