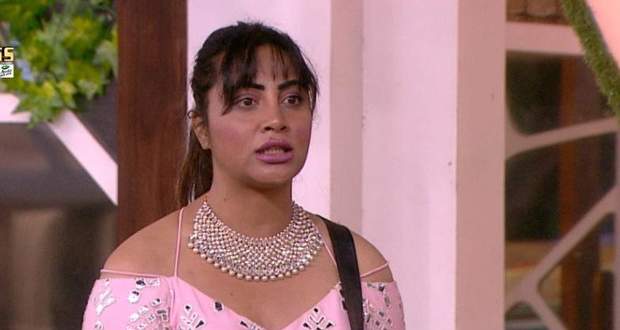 In the forthcoming episodes of Bigg Boss 14, Devoleena Bhattacharjee will be angered by Arshi Khan's attitude toward her and will get violent.

So far in Bigg Boss 14, Mouni Roy graced the set of Bigg Boss and made the housemates do an interesting task with her Buffalo, Bhuri.

Further, Vikas Gupta decided to not use his joker card to eliminate Devoleena who is Eijaz Khan's proxy instead of him and walked away.

Now as per the spoiler alerts of  Bigg Boss 14, Arshi will get into an argument with Rahul Vaidya who will tell her that she has become another word for rude.

Further, she will fight will Devoleena who will get angry and will throw a utensil in anger hurting Abhinav Shukla in the process according to the latest twists of Bigg Boss 14.

Let's see if Arshi's attitude creates problems for her in the upcoming episodes of Bigg Boss 14.

© Copyright tellybest.com, 2020, 2021. All Rights Reserved. Unauthorized use and/or duplication of any material from tellybest.com without written permission is strictly prohibited.
Cached Saved on: Friday 16th of April 2021 11:06:55 PM