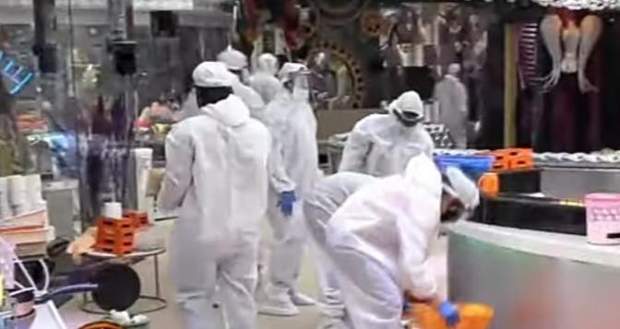 In the future episodes of Bigg Boss 14, all the food items and ration will be taken away from the housemates which will shock them.

So far in Bigg Boss 14 episodes, Sargun Mehta and Hardy Sandhu gave the housemates Farebi task in they had to feed spicy ladoos to the housemates they choose.

Further, Salman Khan announced that no one is going to be eliminated this weekend which made everyone happy.

Now as per the future gossips of Bigg Boss 14, suddenly people in protective garments will come there and will take away all food ration from the kitchen.

They will also search the whole house for food items while the housemates will be locked outside in the garden area according to the recent twists of Bigg Boss 14. Later, Eijaz Khan will leave the show due to shooting while Devoleena Bhattacharjee will come as his substitute.

Let's see if the housemates can survive without food for a few days in the upcoming episodes of Bigg Boss 14.

© Copyright tellybest.com, 2020, 2021. All Rights Reserved. Unauthorized use and/or duplication of any material from tellybest.com without written permission is strictly prohibited.
Cached Saved on: Tuesday 2nd of March 2021 09:48:11 AM