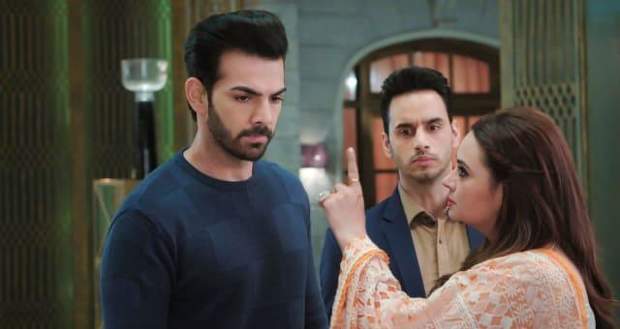 In the forthcoming episodes of Kahan Hum Kahan Tum serial, viewers will witness an interesting new twist as Rohit will send Veena to jail for kidnapping Sonakshi.

In the present story of KHKT story, Rohit learned about Sonakshi’s life being in danger and asked Sumit to help him. Later, Sonakshi’s blood report came positive and she was sent to health camp.

However, she was sent in a car and didn’t reach any health camp.

Now as per the spoiler twists of Kahaan Hum serial, Rohit will think that Nishi is involved in Sonakshi’s kidnap and will threaten to kill her.

However, the kidnapper will be revealed as Veena who will be keeping Sonakshi in the basement of Sippy mansion. She will do it to separate Rohit and Sonakshi and will reveal the truth in front of Nishi.

Nishi will tell Rohit about the same and Rohit will thus send Veena to jail for getting Sonakshi kidnapped as per the gossip updates of Kahan Hum Kahaan Tum serial.

© Copyright tellybest.com, 2018 & 2019. All Rights Reserved. Unauthorized use and/or duplication of this material without written permission from tellybest.com is strictly prohibited.
Cached Saved on: Tuesday 7th of July 2020 05:48:31 AMCached Disp on: Thursday 9th of July 2020 07:51:59 PM