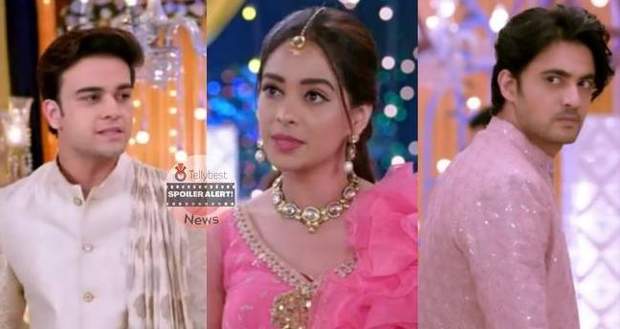 In the upcoming story of Kumkum Bhagya, Prachi will take Siddharth's side in front of Ranbir and leave him with a broken heart.

The current track of Kumkum Bhagya revolves around the Diwali celebrations in the Kohli family where Prachi tells Ranbir that she still loves him and wants to live with him forever.

Ranbir decides to stop Prachi's wedding after hearing her confession but Pallavi reminds him that Prachi is carrying Sid's baby.

According to the latest twists of Kumkum Bhagya, Ranbir will beat up Siddharth as he blames Sid for ruining his and Prachi's married life.

Prachi will take Siddharth's side and blame Ranbir for attacking Sid while claiming him innocent.

According to Prachi, Ranbir is in the wrong for using violence and Sid has not done anything bad to them.

Ranbir will feel betrayed as Prachi will support Sid instead of him and he will leave with a broken heart.

Will this incident end Ranbir's faith in his and Prachi's relationship?

Let us see if Prachi succeed in finding Mihika and reveal the truth before her and Sid's wedding in the upcoming episodes of Kumkum Bhagya.

© Copyright tellybest.com, 2022, 2023. All Rights Reserved. Unauthorized use and/or duplication of any material from tellybest.com without written permission is strictly prohibited.
Cached Saved on: Monday 21st of November 2022 04:02:35 AMCached Disp on: Wednesday 7th of December 2022 04:32:10 PM