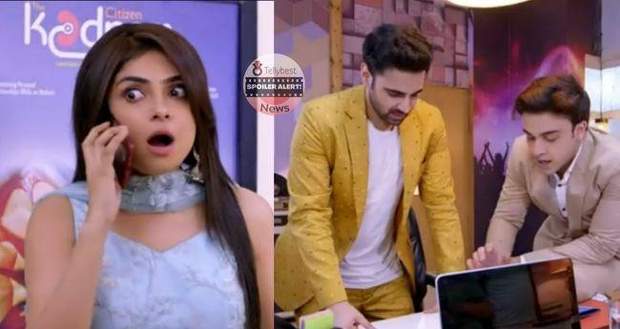 Kumkum Bhagya: OMG! Aryan says "I LOVE YOU" to Sahana!

In the upcoming story of Kumkum Bhagya, Aryan will say "I love you" to Sahana but with an interesting twist.

The current track of Kumkum Bhagya revolves around Prachi, Sahana, and Sid trying to save Mihika and reveal the evil faces of Alia and Rhea.

Ranbir acts more caring toward Prachi after she wears the ring brought by him on her engagement which confuses Prachi.

As per the latest twists of Kumkum Bhagya, Aryan will propose his love to Sahana but with a hilarious twist.

Ranbir and Aryan were together at the office when suddenly Sahana calls Aryan as she needs his help with a doctor.

On seeing Sahana's number saved as "Sahana" instead of something funny, Ranbir begins to tease Aryan saying that he likes Sahana.

Aryan panics while Ranbir takes this opportunity to receive the call and tell "I Love you" to Sahana as Aryan.

Sahana gets flustered on hearing those words and furiously threatens to murder Aryan as soon as she meets him.

Hearing Sahana's threats, both Ranbir and Aryan get scared and Ranbir clears up the misunderstanding which apparently saves Aryan's life.

However, the question remains whether Aryan will confess his feelings to Sahana in the future.

Let us see how the track between Aryan and Sahana proceeds in the upcoming episodes of Kumkum Bhagya.