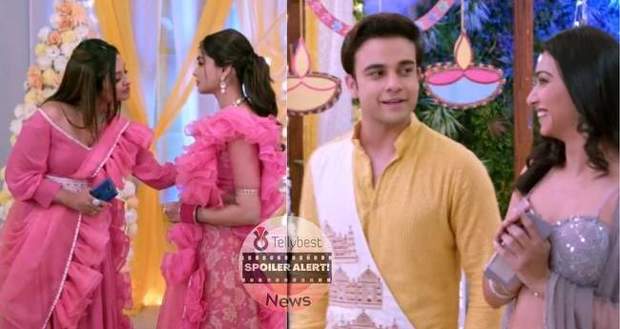 In the upcoming story of Kumkum Bhagya, Ranbeer will make Rhea and Prachi who are dressed as candyfloss jealous of Neha.

So far in the story of the serial, Diwali Party is going on in the Kohli Mansion and Vikram's friend has come with his daughter Neha.

Neha is an old college friend of Ranbeer too.

As per the spoilers of Kumkum Bhagya, Ranbeer hugs Neha ignoring both Rhea and Prachi who are fighting over the ownership of Ranbeer.

Prachi says her Kumkum Bhagya belongs to Ranbeer while Rhea challenges whoever will get successful in doing the Aarti with Ranbeer will succeed in winning Ranbeer.

However, Ranbeer is getting extra cosy with Neha leaving behind the two candyflosses Rhea and Prachi wearing the same dupatta.

Let us see whether the same dupatta will lead to another drama when it catches fire and how will Ranbeer's intentional jealous nature impacts Rhea and Prachi in the future episodes of Kumkum Bhagya.

© Copyright tellybest.com, 2022, 2023. All Rights Reserved. Unauthorized use and/or duplication of any material from tellybest.com without written permission is strictly prohibited.
Cached Saved on: Monday 21st of November 2022 05:01:19 AMCached Disp on: Friday 9th of December 2022 04:46:31 AM