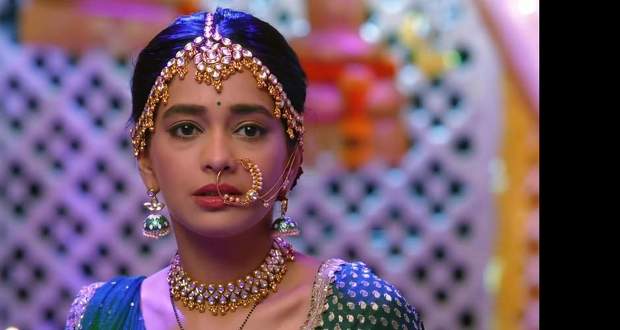 Kumkum Bhagya Spoiler: Rhea and Prachi in a dance battle

In the upcoming Kumkum Bhagya serial episodes, Rhea and Prachi will do a dance battle to get the good bangles from Pallavi.

Up until now in Kumkum Bhagya story, Ranbir managed to convince Pallavi to give a second chance to Prachi and Pallavi gave the house keys to Pallavi for the Janmashtami celebration.

Meanwhile, Abhi called his friends to drink to Pragya's mansion thinking that she will get angry as alcohol is not allowed in the mansion.

Now as per the upcoming twists of Kumkum Bhagya, Pallavi will inform Prachi and Rhea that she will give her gold bangles to the daughter-in-law who will do a better Krishna dance in the Janmashtami celebration.

During the dance, Rhea will break her glass bangles and will throw them near Prachi's legs. Prachi will get hurt by the glass pieces but will jeep on dancing, according to the gossips of Kumkum Bhagya.

Let's see who will win in the upcoming story of Kumkum Bhagya.