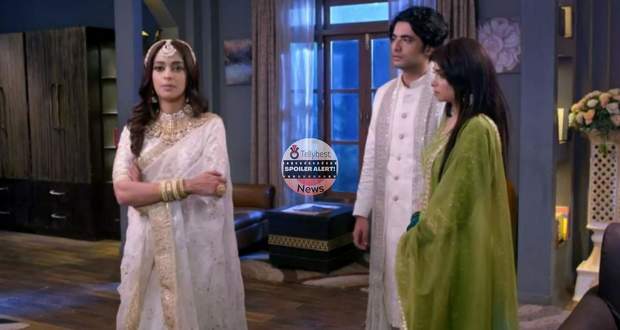 In the upcoming story of Kumkum Bhagya, Prachi will make Ranbir jealous intentionally by getting closer to Sid.

The current track of Kumkum Bhagya revolves around Prachi and Sid's engagement before which Prachi gets to know that Alia and Rhea are blackmailing Siddharth as they have Mihika in their custody.

According to the latest twists of Kumkum Bhagya, Prachi and Sahana will join Siddharth to save Mihika from Alia and Rhea's capture.

However, as the point of letting Ranbir know comes into question, Prachi decides to test Ranbir ruthlessly and see if he genuinely loves her.

As per the upcoming future story of Kumkum Bhagya, Prachi will act casually in front of Ranbir and call Sid to come with her as she needs to have a private talk with him.

Ranbir will be burning in jealousy on seeing Prachi giving more attention to Sid compared to him and will immediately react against it.

Cleverly, Prachi will dismiss Ranbir's opinion as she and Sid are going to get married.

Let us if Prachi's strategy works on Ranbir and whether he gets jealous more & more in future episodes of Kumkum Bhagya.

© Copyright tellybest.com, 2022, 2023. All Rights Reserved. Unauthorized use and/or duplication of any material from tellybest.com without written permission is strictly prohibited.
Cached Saved on: Monday 21st of November 2022 02:58:52 AMCached Disp on: Wednesday 7th of December 2022 03:19:27 PM