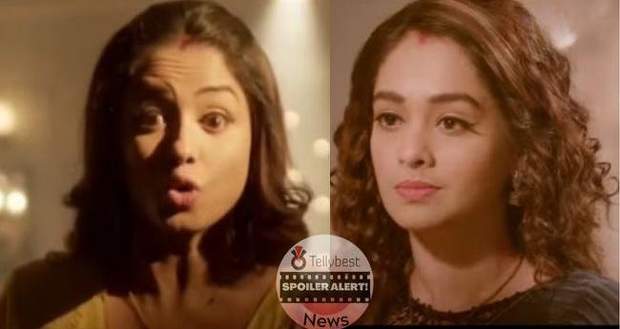 In the upcoming story of Kumkum Bhagya, Prachi will reveal to the family members about Rhea’s fake pregnancy.

So far in the story of the serial, Rhea is faking her pregnancy to get close to Ranbir so that the attention of the family shifts to her from Prachi's pregnancy.

Rhea has been doing the pregnancy drama and is able to maintain it with Alia's help.

According to the latest twists of the serial Kumkum Bhagya, Rhea has cooked up a plan to get Prachi married to Sid during the sangeet ceremony itself.

However, Prachi finds out about Rhea’s plan and confronts her promising her that she will end Rhea’s façade of pregnancy.

Prachi also challenges Rhea saying that come what may, she will never allow even Rhea’s shadow to be cast on Ranbeer.

In the upcoming twists of the serial, Prachi will try to expose Rhea's fake pregnancy to Ranbeer and make sure that Sid and Mihika are safe from Alia and Rhea.

Let us see if Prachi succeeds in ending Rhea’s fake pregnancy drama and also if she manages to save Sid from Rhea.

© Copyright tellybest.com, 2022, 2023. All Rights Reserved. Unauthorized use and/or duplication of any material from tellybest.com without written permission is strictly prohibited.
Cached Saved on: Monday 21st of November 2022 06:04:50 AMCached Disp on: Saturday 10th of December 2022 02:22:57 PM