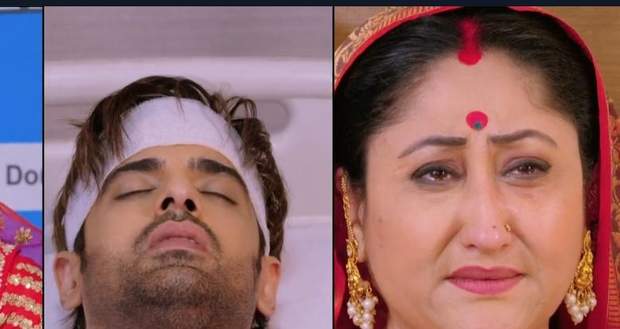 In the upcoming episode of Lockdown Ki Love Story serial, Nutan will tell Sonam that she ruined Dhruv's life and will throw her out of the hospital and his life.

Up until now in Lockdown Ki Love Story episodes, Sonam shot Raghav but it was revealed that he wore a bulletproof vest and forcefully took her to the Mandap to marry her.

However, Dhruv came there and beat him. Raghav shot Sonam but Dhruv too the bullet for her.

Now as per the spoiler alerts of Lockdown Ki Love Story, Dhruv will be taken to hospital where it will be stated by the doctors that he is in a critical condition.

Further, Nutan will blame Sonam for this incident and will tell her to leave Dhruv's life and will kick her out of the hospital according to the future gossips of LKLS serial.

Let's see what will be Dhruv's reaction when he will wake up in the upcoming story of Lockdown Ki Love Story serial.

© Copyright tellybest.com, 2022, 2023. All Rights Reserved. Unauthorized use and/or duplication of any material from tellybest.com without written permission is strictly prohibited.
Cached Saved on: Wednesday 25th of January 2023 12:41:45 PMCached Disp on: Monday 6th of February 2023 02:49:10 AM