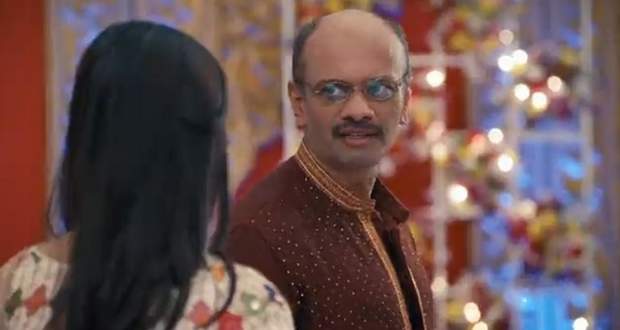 In the upcoming episodes of Mehndi Hai Rachne Waali serial, Vijay (Milind Pathak) will hear that Raghav (Sai Ketan Rao) and Pallavi (Shivangi Khedkar) went somewhere together and will misunderstand their relationship.

The current story of Mehendi Hai Rachne Wali serial revolves around Raghav getting into the Mehandi function with the help of Amruta while Pallavi found out that he is Jaya's son and Kirti's brother.

Further, there was an emergency at workplace due to which Pallavi left the function and went to the shop without telling anyone.

Now as per the latest gossip of MHRW, Nikhil's friends will inform him that they saw Pallavi going with Raghav which will make Vijay think that they are in a relationship.

Meanwhile, Sharda will find a pregnancy report while Sulochana will say that the report is of Pallavi's and will decide to get it checked in the hospital.

Let's see what will they find at the hospital in the future story of Mehndi Hai Rachne Waali (मेहँदी है रचने वाली) serial.

© Copyright tellybest.com, 2022, 2023. All Rights Reserved. Unauthorized use and/or duplication of any material from tellybest.com without written permission is strictly prohibited.
Cached Saved on: Friday 18th of November 2022 06:44:08 AMCached Disp on: Tuesday 6th of December 2022 12:55:43 PM