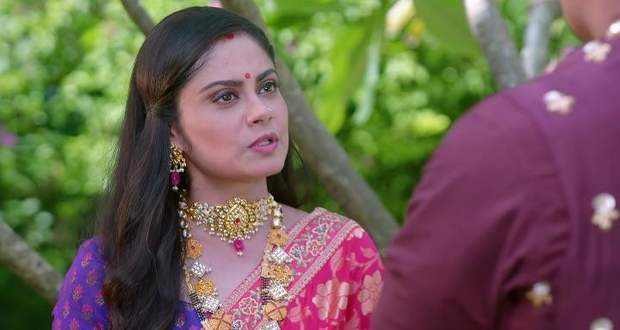 Molkki: Virendra and Sakshi make a bet on Purvi and Vupul's relationship

In the future episodes of Molkki serial, Virendra (Amar Upadhyay) and Sakshi (Toral Rasputra) will make a bet on Purvi (Priyal Mahajan) willingly accepting the marriage with Vipul.

So far in Molkki serial, Virendra and his family found aout that Vipul is the new manager of their Haveli and thus will stay there only.

Further, Sakshi suggested Vipul as the perfect groom for Purvi which Virendra refused due to being uneasy.

Now as per the spoiler alerts of Molkki, Sakshi will keep trying many ways to get Purvi and Vipul be close to each other while Virendra will tell her to not do it.

They will argue and she will bet him that Purvi will willingly accept marrying Vipul within one week and Virendra will accept the bet.

Let's see if Sakshi can win the bet in the upcoming story of Molkki serial.

© Copyright tellybest.com, 2020, 2021. All Rights Reserved. Unauthorized use and/or duplication of any material from tellybest.com without written permission is strictly prohibited.
Cached Saved on: Saturday 1st of October 2022 09:54:03 PMCached Disp on: Friday 7th of October 2022 02:24:35 PM