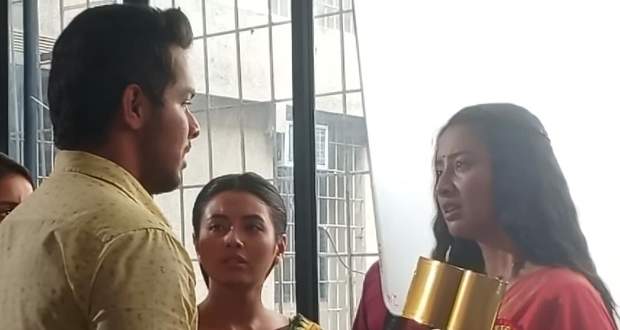 In the upcoming Nima Denzongpa serial episodes, Nima will manage to reach Nari's award function in time while she will be disappointed in Suresh for not keeping his promise.

Up until now in Nima Denzongpa's story, Nima's BP went low and the doctor told her to rest while Suresh told Nari that he can come to the award function as her parent.

However, Varun told Tulika that he will be insulted if Suresh goes to the college as Nari's father after which Tulika spiked his drink and stopped Suresh from going to college.

Now as per the gossips of Nima Denzongpa, Nima and her daughters will manage to reach the award function in time but Nari will be disappointed not to see Suresh present.

Further, Suresh will reach there and will apologize to Nari but she will say that she will always remember seeing the trophy that her father was not there for her, according to the upcoming twists of Nima Denzongpa.

Let's see what will Nari do next in the upcoming story of Nima Denzongpa.

© Copyright tellybest.com, 2022, 2023. All Rights Reserved. Unauthorized use and/or duplication of any material from tellybest.com without written permission is strictly prohibited.
Cached Saved on: Thursday 26th of January 2023 01:44:25 PMCached Disp on: Monday 6th of February 2023 05:41:05 PM