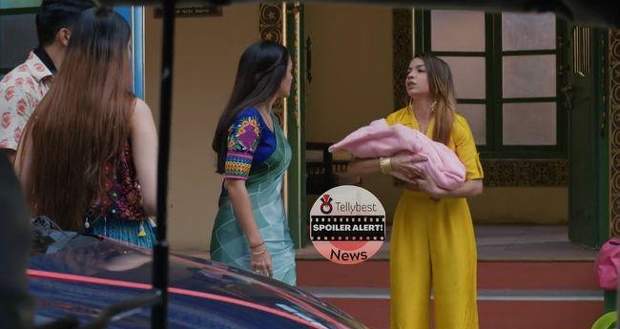 In the upcoming story of the Pandya Store serial, Rishita will suffer from post-pregnancy depression and will start random arguments with the members of the Pandya family.

So far in the serial Pandya Store, Swetha managed to tick off Rishita by spoiling the milk that was supposed to be for Chutki and framed Dhara for everything.

Now according to spoilers of the serial, Rishita will go off on the tangent that nobody likes her or Chutki anymore and that everyone is focused on Chiku only because of Dhara.

As per the gossip, Rishita will be diagnosed with post-pregnancy depression and will lose her temper often at the whole Pandya family while threatening to leave them with her Chutki.

In the upcoming episodes, we will see Rishita falling into Swetha’s trap and causing ever more chaos in the family which diverts their attention from Chiku.

Let’s see how Swetha uses Rishita for her personal gain in future episodes of Pandya Store.

© Copyright tellybest.com, 2022, 2023. All Rights Reserved. Unauthorized use and/or duplication of any material from tellybest.com without written permission is strictly prohibited.
Cached Saved on: Wednesday 25th of January 2023 02:39:57 PMCached Disp on: Monday 6th of February 2023 06:18:28 PM