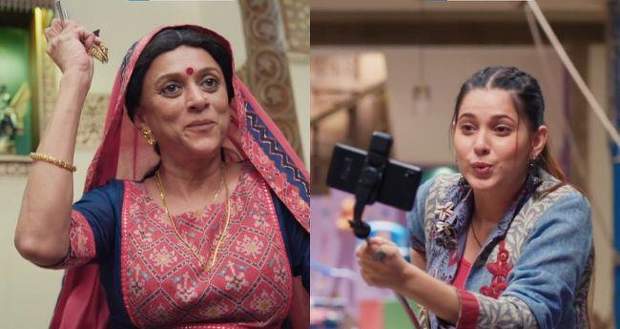 In the future story of the Pandya Store serial, Suman will accidentally throw her keys into the well while everything will get live-streamed.

So far in the serial Pandya Store, Krish refuses to go to college for the fear of humiliation and insists on working in the Pandya store.

Meanwhile, Rishita is still a little hesitant to talk to Dhara as she blames her for Krish falling in love with Keerti.

Now according to spoilers, Suman accidentally throws her keys into the well while Raavi is giving a live tour of her house on her social media.

Further, Suman angrily snatches the phone from Raavi forgetting to turn off the live stream which leads to the viewers seeing also the drama and Dhara, Suman being humiliated.

In the future episodes, we will see Shiva rebuking Raavi for humiliating the family while Dhara saves a lady and her baby from getting into an accident.

Let’s see if Raavi is able to prove her innocence to the Pandya family in the future episodes of Pandya Store.

© Copyright tellybest.com, 2020, 2021. All Rights Reserved. Unauthorized use and/or duplication of any material from tellybest.com without written permission is strictly prohibited.
Cached Saved on: Sunday 2nd of October 2022 06:27:21 AMCached Disp on: Thursday 6th of October 2022 05:17:06 PM