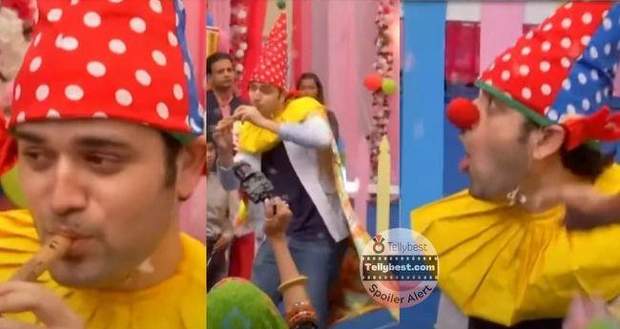 In the upcoming story of Pandya Store, Krish will dress up as a clown.

So far in the episodes of Pandya Store, Shweta changes the document very cunningly from adoption paper to Pandya Store Ownership papers.

Now as per the latest spoiler of the Pandya Store, everyone is happy about getting Chiku’s custody and plan to throw a party in which Krish surprises everyone with a joker’s get-up.

Furthermore, all the Pandya family enjoys the party and celebrates to the fullest by jumping on the trampoline and dancing.

According to the latest gossip of Pandya Store, Krish entertains everyone especially Chiku by becoming a clown and Shweta plans on taking everything that the Pandya family owns.

Later, Swetha spoils the party by announcing that she is the owner of the Pandya Store and the house.

Let’s see how Shweta takes over the Pandya house in the upcoming episodes of Pandya Store.

© Copyright tellybest.com, 2022, 2023. All Rights Reserved. Unauthorized use and/or duplication of any material from tellybest.com without written permission is strictly prohibited.
Cached Saved on: Wednesday 25th of January 2023 08:43:47 PMCached Disp on: Monday 6th of February 2023 04:39:23 AM