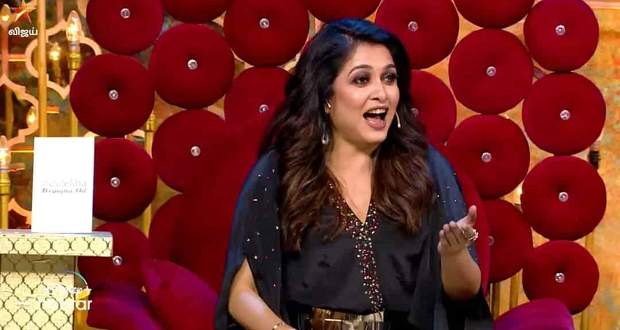 The latest promo of BB Jodigal 2 (10-07-2022) starts with Anchor Priyanka and Raju introducing the week as “Retro Vs Black and White round”.

The judges Ramya Krishnan and Satheesh give a stunning entry on the sets of BBJ2. A glimpse of all the contestants' performances was shown.

The contestants are found performing a small mimic task where all the contestants including anchor Raju mimic the legendary stars “MG Ramachandran” and “Shivaji Ganesan”.

The new promo of BB Jodigal 2 (10 July 2022) shows the stunning retro performance of Amir and Pavni. The judges appreciate their performance.

Amir and Raju make fun of each other which is enjoyed by everyone.

Today's BB Jodigal 2 10th July starts with the stunning entry of the anchors Priyanka and Raju.

The anchors then welcome the judges and contestants to the show. They give a stunning entry on the sets of BBJ2.

The teams representing Retro are:

The teams representing Black and White are:

Harathy and Ganesh are rested this week to compensate for the one-on-one battle.

To deliver the first performance of the week Isaivani and Velmurugan enter the stage. They deliver a clumsy performance which disappoints the judges. The judges tell them many corrections and grade them as below-average performance.

Suja and Shiva Kumar enter battle next. They deliver an electrifying performance which is enjoyed by everyone. The judges appreciate their performance.

Shiva then enacts one of the famous scenes of Shivaji Ganesan, his grandfather. Everyone gave him a standing ovation for his act.

Next Iyyki Berry and Dev enter to deliver their performance representing Black & White. They deliver a stunning performance which is appreciated by the judges. The judges ask him to develop his facial expressions and lip-sync during dancing.

The anchors then announce a small "mimic challenge" where all the contestants perform like legendary actors "MG Ramachandran" and "Shivaji Ganesan" for western songs. Whereas, Raju mimics Amir and Vice versa.

Then Amir and Pavani play a compatibility challenge where Amir answers about Pavni. He answers everything correctly and everyone appreciates their compatibility.

Then a mirror task is announced by the anchors where two contestants must come forward and reflect the truth about themselves.

First, Amir and Thamarai play the game and their task ends up in an emotional way. Suja and Pavni then perform this mirror task followed by Shiva and Ganesh. This ends in a big conflict between Shiva and Ganesh which shocks everyone. They finally reveal it as a prank. 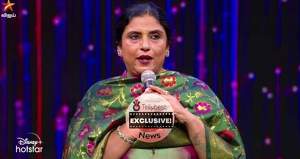 © Copyright tellybest.com, 2022, 2023. All Rights Reserved. Unauthorized use and/or duplication of any material from tellybest.com without written permission is strictly prohibited.
Cached Saved on: Wednesday 25th of January 2023 06:13:29 PMCached Disp on: Thursday 9th of February 2023 08:50:02 AM