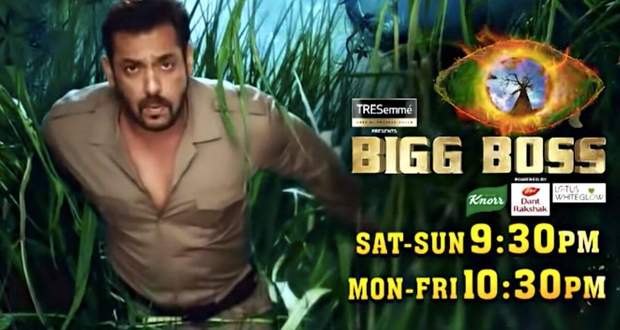 Bigg Boss 15's recent promos for this weekend (02-10-2021, 9:30 pm) episode kick starts with Salman Khan’s dashing entry amid the jungle set-up, the host is seen in the new and mesmerizing avatar.

In the Bigg Boss 15 latest episode, we will see Salman Khan and BB15 contestants stealing our hearts in their unexpected avatars.

Salman Khan, the host of BB 15, the tiger of the jungle is seen dancing to the tunes of “Swag Se Swagat” along with the contestants from Colors TV’s dance reality show “Dance Deewane” - "Tiger Is Back”.

The premiere promo of Bigg Boss season 15 indicates the show's telecast timings, i.e., Monday to Friday 10:30 pm to 11:30 pm, and Weekend Ka Vaar with Salman will be airing on Saturday and Sunday at 9:00 pm on Colors TV Channel.

In another promo of Bigg Boss 2021, Salman Khan makes a statement by saying, contestants in Bigg Boss season 15 will not have any basic necessities and will have to fight for them.

Salman tells that this season the introduction of the contestants will be in a different way.

Further, Jay Bhanushali the first contestant of Bigg Boss season 15 enters the house and settles himself. Salman Khan comes there and shows him all the rooms.

Later, Salman takes Jay out of the house and tells him that they have to live outside the house on the grass and wood beds with no washrooms and no luggage. Salman also introduces Jay to Vishwa-Sundari.

Salman goes to the stage and welcomes the next contestants who are Tejasswi and Vikram. Salman has an assistant BigG for this season. Tejasswi and Vikram play a game and as Tejasswi wins she gets to take a survival kit to stay in the jungle and directly goes into the Bigg Boss jungle. While Vikram has to go through a maze to reach the jungle.

Inside the house, Jay welcomes them and gives them all the information given by Salman Khan.

The next contestants are Vidhi Pandya and Simba Nagpal and both of them enter the jungle through the maze.

After a game, as Ieshaan wins he and Donal are given the survival kit and sent to a BB camp where they have 2 tents and a bonfire to stay the night. Umar passes through the maze and enters the jungle where everyone pranks him saying he has to free them from a room in which they are locked.

On the stage comes the next contestants' Akasa Singh and Karan Kundra. Salman makes them play a game in which Akasa wins and gets to select 8 items as a survival kit. Karan walks to the maze to reach the Bigg Boss jungle.

Next comes the last 3 contestants of the season, Afsana Khan, Miesha Iyer, and Sahil Shroff. They all play a game where they have to catch the balls thrown by Salman and Sahil wins it. He collects items for the survival kit.

Further, Afsana and Miesha enter the jungle through the maze.

Later, Ranveer Singh arrives on the Bigg Boss season 15 stage. Salman asks him why has he come here to which Ranveer says that he has joined the Colors Family.

Later, Ranveer Singh comes on the stage and tells Salman he has come to observe and learn how to host as he has also joined the Colors family.

Continuing with Bigg Boss, BigG goes to meet Donal and Ieshaan in the real jungle and gives them a 'sandesh'. The Sandesh tells them that they have to nominate either one of them in the first week of Bigg Boss.

After some discussion, they decide that Ieshaan will be nominated. So, they both are sent to the Bigg Boss jungle.

Inside the house, BigG comes to the Bigg Boss jungle and gives a 'sandesh' to the contestants which informs them that the nights can be scary or it will introduce them to an 'Apsara'.
Later that day, Mouni Roy comes to Bigg Boss jungle as the Apsara and presents a beautiful performance. She asks everyone to tell who is their 3 least favorite people.

In the end, Donal, Vidhi, and Ieshaan are chosen as the least favorite and they are asked to clean the Bigg Boss house as a task.

After they clean the house, Bigg Boss tells Mouni that the task given to her has been completed partially. So, Mouni welcomes the Bigg Boss OTT favorites Shamita, Pratik, and Nishant to the Bigg Boss jungle.

Bigg Boss tells the contestants that these new contestants will not be nominated till they are inside the house and they can live anywhere they want.

As soon as the three contestants start interacting with everyone there starts an argument between Pratik and Umar.

Later, at night, Pratik and Meisha try to have a conversation about their long last friendship but end up arguing. 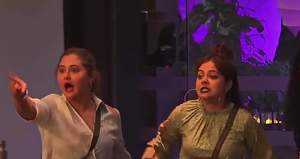 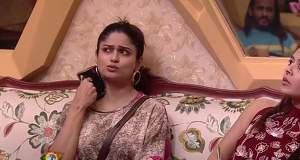 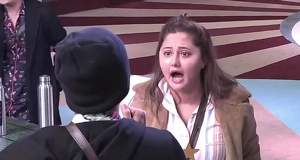