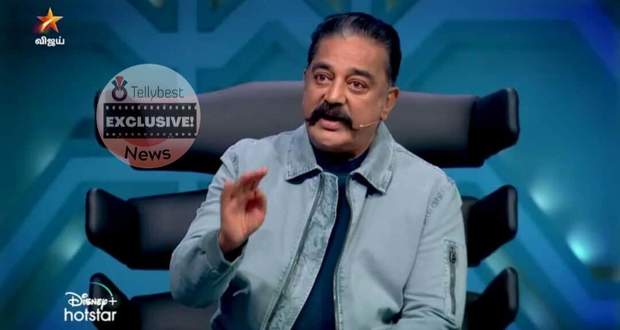 He advises the contestants to wear the mike all the time. He points out Queency and Kathir
Then, Kamal announces an award task where he asks Nandini to present all the contestants with an award that resembles their nature in the house.

Nandini then presents everyone with the award where some contestants disagree with them.

Azeem, Maheshwari, Dhanalakshmi and ADK do not agree with their awards and give them to the other contestants they wish.

Gossips occur between the contestants and ADK questions Nandini about her presenting the award.

Later, Kamal discusses the deserving contestants who have to be in jail. Janani and Ram express their thoughts and disagreements about sending them to jail.

Azeem and Queency then talk about the other housemates.

Further, Kamal discusses the conflict that occurred between Asal and Dhanalakshmi. He then advises them about their behaviors.

Kamal then announces that Dhanalakshmi is safe from elimination.

Further, Kamal discusses with the other contestants related to other activities in the house.

Shivin moves to the safe zone after the announcement from Kamal Hasan.

Finally, Shanthi and Maheshwari stay in the danger zone and one will be out of the show.

Kamal Hasan then announces the first elimination of the season as Shanthi.

The housemates get emotional over her eviction. They bid her an emotional farewell.

Bigg Boss then asks her to elect a person to contest the captaincy task on her behalf and she appoints Queency.

Then Shanthi moves out of the house and meets Kamal and interacts with him regarding her journey in the house.

A small AV is played depicting her journey of her in the Bigg Boss house.

Kamal Hasan then wishes all the contestants a Happy Diwali and takes his leave for the week. 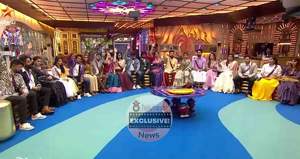 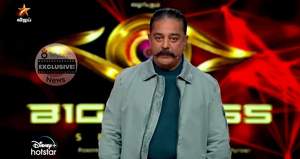 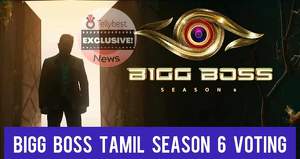