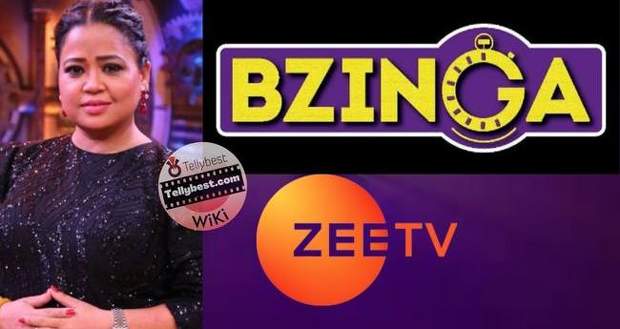 Bazinga Hindi Version is all set to make its presence on Zee TV which will be hosted by the Laughter Queen, Bharti Singh.

The new show, Bzinga is going to be a family game show which will be highly interactive, where families can take away prizes at very low-cost prices.

Bzinga Hindi version is a remake of the Bajinga which airs on Zee Keralam and is a Malayalam family reality TV show.

The Malayalam format of Bazinga has seen people take home with them expensive products at the lowest market prices such as Cars at Rs. 2, iPhones at Rs. 5, Macbooks for Rs. 8, & Microwaves at Rs. 3.5, & much more.

The Hindi TV format of Bzinga is going to be very similar to the Malayalam Bazinga family show which also invites influencers, dancers, artists, etc. to make the episodes very interesting.

Bzinga is an auction/bidding game that was initially a start-up that began as an App on Play Store but later got converted into an interactive Television game, powered by Zee Keralam.

The starting date of the Bzinga game show in Hindi is 12th February 2023 and the telecast timing would be 5 PM every Sunday (telecast days).

However, these are subject to change.

Bzinga is an interactive auction game application that was first launched on Play Store to be used by users to win exciting things such as Laptop, iPhones, etc. at a very low price like Rs. 10.

This Bazinga application was later translated into a TV show that first aired on Zee Keralam.

Bzinga Hindi Version will also follow the concept used in Bazinga Malayalam version where a host (Bharti Singh) will be urging the participating families to bid as low as they can go to win exciting products.

With a live audience watching and cheering for the participants, the families invited along with the influencers will have to place the lowest bid on the products up for auction.

The auction can last up to two days with the most unique bids placed on them that are going to keep the viewers and the audience engaged in watching the Bajinga family show.

As the Hindi version picked up from the Malayalam family game show, Bzinga, is going to be hosted by Bharti Singh, the TRP ratings are anticipated to perform well.

Since the audience craves laughter and fun at the same time, Bazinga will be able to deliver a thrilling interactive gameplay atmosphere for both the audience/viewers and the participants.

Q. Where can I watch Bzinga?

A. You can watch Bzinga on Zee TV.

Q. What is the OTT platform to watch Bzinga?

A. You can watch Bzinga on Zee5 as it is the OTT platform for Zee TV.

Q. What are the telecast time and telecast days for Bzinga?

A. The telecast time of Bzinga is going to be 5 PM and the telecast day is Sunday.

Q. Who is going to host Bzinga Hindi Version?

A. Bharti Singh, popularly, known as the Laughter Queen, is going to host Bzinga family game show in Hindi.

© Copyright tellybest.com, 2022, 2023. All Rights Reserved. Unauthorized use and/or duplication of any material from tellybest.com without written permission is strictly prohibited.
Cached Saved on: Friday 27th of January 2023 01:35:27 AMCached Disp on: Tuesday 31st of January 2023 08:01:08 PM