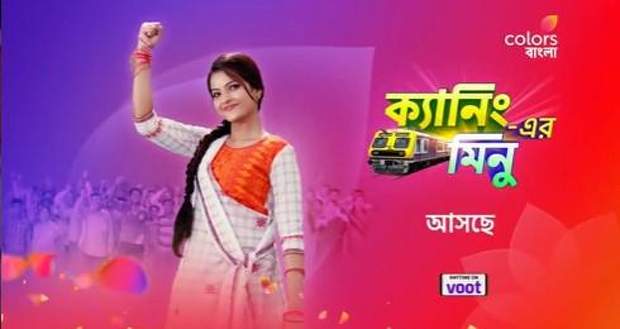 Diya Bose is playing the lead role of the character named Minu in the serial.

Diya Basu was last seen as Priyam in the Jibon Saathi serial which made her gain fame.

The rest of the cast is not yet confirmed but will soon be updated.

Here is the detailed description of the serial Indrani on Colors Bangla, its upcoming story, twists, spoilers, written updates, TRP Ratings, and many more.

Canning Er Minu is a story about a girl from Canning in South 24 Parganas who is very popular among the local workers of the train station.

In the promo released by Colors Bangla, we see Minu helping out some poor people in the railway station when suddenly a couple approaches her for help.

The couple tells her that they are being chased by the goons sent by their parents as they have married each other despite being of a different caste.

Minu instantly gathers people around the station and confronts the men, successfully making them flee from there.

As all the people rejoice in the victory of love, Minu says that unity can solve even the most difficult situations.

The story will proceed with Minu arriving at Kolkata in search of work and starting a new journey with her same ideals.

It will be interesting to see how the story proceeds as thus far there is no mention of any love track in Canning Er Minu.

Canning Er Minu is expected to gain good TRP ratings when it starts to air.

Diya Bose is already famous among the audience for her performance in Jibon Saathi which will help Canning Er Minu to get more viewers.

Moreover, the time slot of 7 PM will help the serial gain more TRP.

Minu is a representation of a feminist character who is expected to be an instant favorite of the viewers.

Let us see how Canning Er Minu performs on the TRP charts in the upcoming episodes.

Q. When is Canning Er Minu going to air on Colors Bangla?

Q. Who is the main lead of Canning Er Minu?

A. Diya Bose who will be playing the character of Minu is the main lead of Canning Er Minu.

Q. Where can I stream Canning er Minu online?

A. You can stream Canning Er Minu on Voot online.