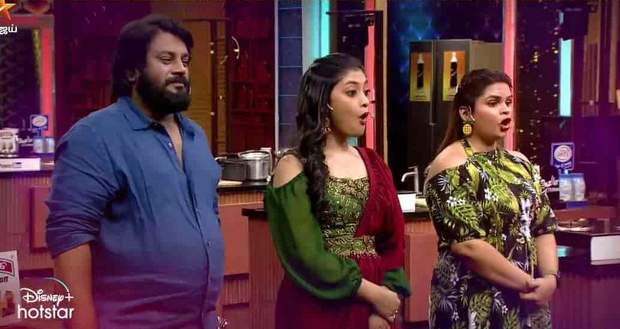 The latest promo of Cook with Comali (10-07-2022) for the upcoming episode starts with the stunning entry of the contestants to the semi-finals of CWC3.

Manimegalai and Bala make so much fun in the sets of CWC3.

The next promo of CWC3 (10 July 2022) shows Manimegalai predicting Ammu Abhirami to be eliminated from the show in a funny manner.

The contestants put in more effort to impress the judges and enter the finale of CWC. Shruthika is found encouraging the participants.

The judges instructed the contestants that 3 of them will enter the finale and 1 contestant will move to participate in the wildcard round.

Ammu Abhirami uses her advantage and changes her ingredient to bitter gourd.

The hindrance of the week is announced as "Siren hindrance" where the cooks must only instruct the comalis and the comalis wear a headphone during the task.

Chef Koushik then enters as a special judge for the show. He shares his insight about CWC.

The cooks stay in the dark room and instruct the comalis to cook the dish. The cooks put in more effort to present a wonderful dish.

The judges announce the second finalist of CWC3 as Ammu Abhirami.

The other three contestants enter the second cooking phase. They must present one dish based on "Chocolate".

All three contestants work efficiently to become the finalist of the show. They present their dishes in front of the judges and get appreciated for their effort.

The judges announce the third finalist as Vidyu Lekha. All cooks and comalis congratulate and appreciate her.

The cook of the week is announced as "Ammu Abhirami".

The fourth finalist of CWC3 is announced as Darshan. All the contestants and comalis appreciate him. The judges applaud his hard work.

Muthukumar gets an opportunity to participate in the wildcard round next week.

© Copyright tellybest.com, 2022, 2023. All Rights Reserved. Unauthorized use and/or duplication of any material from tellybest.com without written permission is strictly prohibited.
Cached Saved on: Wednesday 25th of January 2023 11:05:35 AMCached Disp on: Monday 6th of February 2023 05:40:21 PM