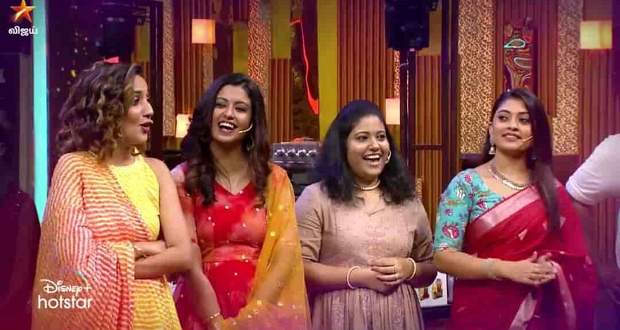 The latest promo of Cook with Comali (12-06-2022) for the upcoming episode starts with all the contestants entering the sets of CWC3 with their friends and family.

Vidyu enters with her husband. Bala welcomes him with garland and showers him with glitters.

The cook and comali selection are based on a water bomb challenge.

The next promo of Cooku with Comali (12 June 2022) shows the judges announcing the first advantage task as the "Pachai payir dosai challenge".

The contestants along with their family members work efficiently to make dosa in the shape of animals.

Manimegalai makes fun with Muthukumar and destroys his plate which puts everyone in shock.

Anchor Rakshan then welcomes the contestants and their guests, comalis and judges to the show. The judges announce the winner of the advantage task as Vidyu, Sanjay and Bala.

The judges then announce the main task as the "plantain or spinach challenge" where two families of ingredients are presented for the cooks to present a dish.

The selection of the ingredients is based on a small task where the comalis and the guests come forward and choose one blick that hides the ingredient.

The judges announce the advantage of Vidyu to block the time limit of any tough contestant. Vidyu uses her advantage against Darshan.

The judges announce the commencement of the cooking time. The comalis pick the ingredients as instructed by the cooks. But they have so much fun with the hindrance.

The cooks stay their mouths shut and instruct them in action. The hindrance task adds fun to the show. The comalis are played music to dance.

The cooks put in more effort to present a wonderful dish and win the immunity band.

The winner of the special prize gas stove is announced as Darshan and Zeenath by the judges.

The judges announce the winners of the main task as Muthukumar, Vidyu and Shruthika. These three contestants compete for the immunity band.

The judges announce the immunity challenge as an "Oil-based dish task". The contestants are asked to prepare 1 dish with the given ingredient in 30 minutes.

The judges announce the winner of the immunity round as Shruthika. She gets the immunity band and is free from elimination the next week. The judges also announced Shruthika as one of the finalists of CWC3.

© Copyright tellybest.com, 2022, 2023. All Rights Reserved. Unauthorized use and/or duplication of any material from tellybest.com without written permission is strictly prohibited.
Cached Saved on: Tuesday 22nd of November 2022 06:19:02 AMCached Disp on: Monday 5th of December 2022 12:39:04 PM