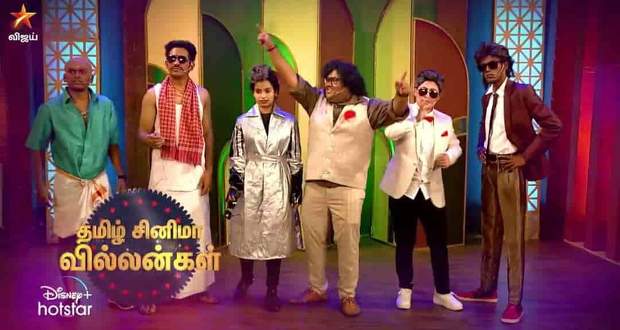 Cooku with Comali Season 3 is a fun reality show telecasted on Vijay Tv to entertain the audience innovatively through a cooking show.

The new promo of Cook with Comali (16-4-2022) for the upcoming episode starts with Anchor Rakshan announcing the week as “Tamil Cinema Villain Round”.

The Comalis are appearing in the costume of famous villains of Tamil cinema. The judges announce the cook and comali pairing based on a small and funny bomb challenge.

One of the recent promos of CWC 3 on 16 April 2022 shows the pairing of Darshan with Sivaangi which is the most expected pairing of the season that happens for the first time. Darshan gets excited about her entry.

In the latest promo, the first advantage task of the week is announced as the "Pumpkin juice challenge". The contestants who present more handmade pumpkin juice will be the winner. All the contestants and comalis are working on the task.

To get to know more, download Cook with Comali Season 3 or watch full episodes online on Star Vijay on Saturday at 9.30 pm and Sunday at 9.00 pm and Disney+Hotstar.

Today's Cook with Comali 3 16th April starts with the mass entry of Manimegalai as the anchor of CWC3 which is an unexpected surprise. She announces the week to be an immunity week.

Manimegalai announces the week as the “Tamil cinema Villain round” where the comalis appear in the costume of famous villains of Tamil cinema.

She then welcomes the judges and contestants to the show and the judges inform the cooks about the immunity week and wish them success.

Then Rakshan enters the stage and replaces Manimegalai and makes fun in the sets. Manimegalai gets back to her costume as Comali.

The different costumes in which the comalis appear for the week are Sivaangi as Rajni from Enthiran, Kureshi as Muthupaandi from Gilli, Bharath as Kamal from Sigappu Rojakkal, Manimegalai as Vikram from Anniyan,  Adirchi Arun as Motta Rajendran from Naan Kadavul and Sunitha as Ajith from Mankatha.

The judges announce the cook and comali pairing based on a “ Bomb challenge” where the cooks light the dummy bomb placed on the table and the bomb split opens where a picture of the villain is found attached to the cake inside the bomb and the comali in that respective costume pairs with that cook for the week.

The pairing for the week happens as follows:

Meanwhile, Kureshi calls Chef Venkatesh Bhat for a Kabaddi duo which is accepted by the chef. He then comes in and plays Kabaddi with Kureshi which ends up in fun and laughter.

The judges announce the first advantage task of the week as the “ Pumpkin juice challenge” where the cooks and comalis must make pumpkin juice without using any tools. The juice must be completely handmade.

The contestants who present the highest amount of juice will be moved to the second advantage task. The winners of the first advantage task are Santhosh, Roshini, Darshan and Ammu Abhirami.

All the cooks and comalis put in more effort to win the advantage task. They then present the nuts for counting.

Ammu Abhirami becomes the winner of the advantage task of the week.

© Copyright tellybest.com, 2020, 2021. All Rights Reserved. Unauthorized use and/or duplication of any material from tellybest.com without written permission is strictly prohibited.
Cached Saved on: Saturday 1st of October 2022 09:03:12 PMCached Disp on: Sunday 2nd of October 2022 06:30:37 AM