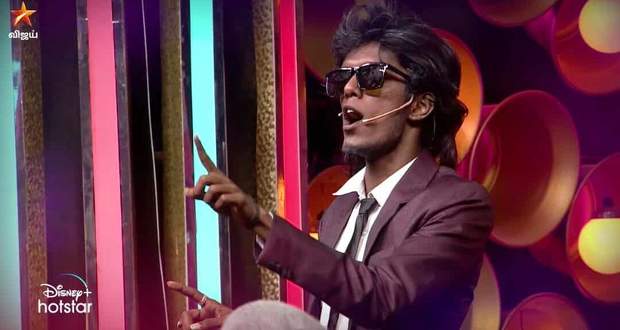 Cooku with Comali Season 3 is a humorous television show that currently airs on Vijay TV and is designed to entertain viewers in a unique way through a cookery show.

The latest promo of Cook with Comali (17-4-2022) for the upcoming episode starts with the judges announcing the week as "Elimination week".

The pairing of the week happens based on a "bomb task". The Comalis are in the costume of famous Tamil cinema villains.

Bala enters the sets of CWC 3 as Anthony from the movie Baasha which excites all the judges. Bala makes fun of all the contestants which are enjoyed by everyone.

The new promo of CWC3 (17 April 2022) shows the different costumes of the Comalis Sivaangi as Rajni from Enthiram, Kureshi as Muthupaandi from Gilli, Adirchi Arun as Motta Rajendra from Naan Kadavul, and Sunitha as Ajith from Mankatha.

Then, Chef Venkatesh Bhat goes on a Kabaddi duo with Kureshi which ends up in fun and laughter.

To get to know more, download Cook with Comali Season 3 or watch full episodes online on Star Vijay on Saturday at 9.30 pm and Sunday at 9.00 pm and Disney+Hotstar.

Anchor Rakshan then welcomes everyone to the show and announces the winner of the advantage as Ammu Abhirami.

The judges announce the main cooking challenge of the week is "International cooking". The dish is selected based on a small "XO game task".

Ammu Abhirami uses her advantage and swaps the dishes between Santhosh and Darshan. Darshan gets continental and Santhosh gets oriental.

The hindrance of the week is announced as "Podu aatam podu". The cooks must dance throughout the main task and simultaneously follow up with cooking.

The cooks and comalis start to make their dish for the main task. The cooks are found dancing as well instructing the comalis and cooking.

All the cooks and comalis are found making so much fun on the sets of CWC. The cooks are found putting their complete effort to win the immunity band.

The cooks present the dishes in front of the judges after the allocated time. The judges appreciate the effort of all the contestants and wish them success.

The judges announce the winners of the main task as Vidyu Lekha, Grace Karunas and Shruthika. These three contestants compete for the immunity band.

The judges announce the immunity challenge as the "Coconut task". The contestants are asked to prepare 1 dish with the coconut in 30 minutes.

Grace Karunas gets a special prize.

© Copyright tellybest.com, 2020, 2021. All Rights Reserved. Unauthorized use and/or duplication of any material from tellybest.com without written permission is strictly prohibited.
Cached Saved on: Sunday 2nd of October 2022 05:05:44 AM