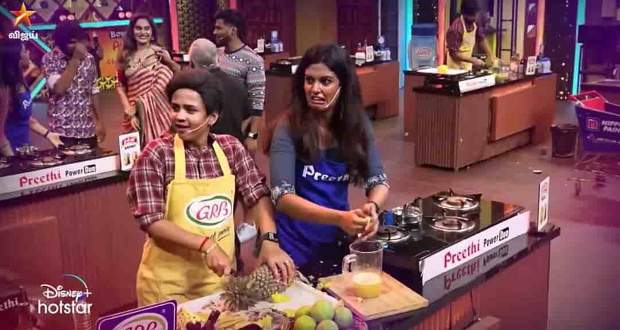 Cooku with Comali season 3, which aired on Star Vijay, is a cooking show in which participants demonstrate their culinary skills as Comalis cook alongside them to make it more entertaining.

The latest promo of Cooku with Comali (19-06-2022) for the upcoming episode starts with the entry of comalis in a famous Kollywood character's costumes.

Sivaangi is in the costume of Vadivelu as Snake Babu. Everyone enjoys her costume.

Kureshi is in the costume of Sasi Kumar and mimics his voice, which puts everyone into laughter.

The next promo of CWC3 (19 June 2022) shows the Veetla Vishesham team entering for their movie promotions.

This week, Ammu Abhirami pairs with Sivaangi, and Darshan selects Sunitha and Roshini teams with Manimegalai.

Download Cook with Comali Season 3 or watch full episodes online at Star Vijay on Saturday at 9.30 PM, Sunday at 9.00 PM, and Disney+Hotstar.

The judges then announce the main task as the "ABC Challenge" where three baskets A, B and C are presented before the contestants with different Ingredients. The cooks must present one dish with all the ingredients in the basket provided.

The comalis select a golden pouch that reveals the ingredients to be cooked.

Darshan gets basket A.

Roshini and Muthukumar choose basket B.

The judges announce the advantage for Muthumar. He uses his advantage against Darshan.

The hindrance of the week is announced as "Jail hindrance" where the cooks and comalis must stay in jail between the cooking time.

The cooks stay in the jail and make so much fun during the main task. After a while comalis enter the jail and have fun. The cooks put in more effort to present a wonderful dish and escape from elimination.

VidyuLekha and Ammu Abhirami are announced as the top 5 contestants.

The contestants who enter the elimination cooking are announced as Muthukumar and Roshini.

The judges announce the elimination challenge as the "Bitter Gourd challenge" where the contestants must present one dish made with Bitter Gourd.

The cooks present one dish from Bitter Gourd after the allocated time. The judges appreciate the effort of the contestants.

The judges announce the eviction of the week as "Roshini". The entire set gets emotional over her elimination. All the cooks and comalis shower their love on her.