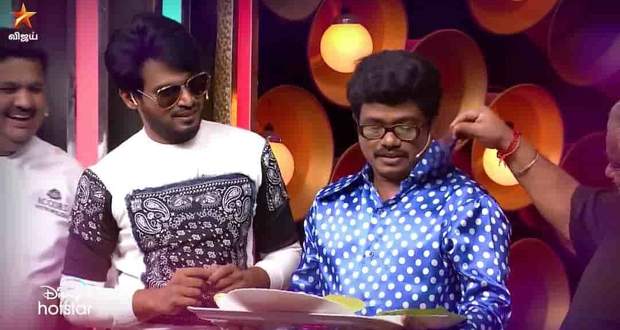 The latest promo of Cooku with Comali (22-05-2022) for the upcoming episode starts with the entry of Madurai Muthu.

He enters the set to reveal the advantage task of the week and he makes fun of Bala which everyone in the set of CWC3 enjoys.

The advantage task is announced as the "Flower appam challenge".

The recent promo of Cook with Comali (22 May 2022) shows the judges announcing the second advantage task of the week as the "Ice eating challenge".

The one who completes eating three ice popsicles first will be declared the winner of the show.

Darshan, Shruthika and Ammu Abhirami are found competing in this challenge.

Today's Cook with Comali 3 22nd of May shows the cooks, anchor Rakshan and comalis dancing for the song "Variya".

Anchor Rakshan then welcomes the contestants, comalis and judges to the show. The judges announce the winner of the advantage task as Darshan.

The judges then announce the main task as the "Triple combination week" where three sets of two ingredients that are least commonly used are given to the contestants to present one dish.

The selection of the ingredients is based on a small task where the comalis come forward and select one bowl with hidden ingredients.

Darshan and Ammu Abhirami pick strawberries and Basil. Roshini and Grace selected Cauliflower and Tapioca. Aravind and Shruthika get Samai rice and Thyme.

The judges announce the advantage of Darshan to cooking with chicken without using any tricky ingredients. But he uses his advantage against Grace.

The hindrance of the week is announced as "Mayilattam hindrance" where the cooks must wear the Mayillatam costume during the cooking time alternately.

The cooks stay in the Mayilattam costume and dance during the cooking time. The set is filled with fun and laughter.

The judges have so much fun with cooks and comalis. They make the hindrance task even funnier.

The cooks put more effort into presenting a wonderful dish and protecting themselves from the elimination round.

The judges get out the dias and appreciate Darshan for his cooking. Chef Venkatesh Bhat lifts him and appreciates him. Ammu Abhirami also gets a standing ovation from the judges.

The judges announce the chef of the week as Ammu Abhirami.

The contestants who enter the elimination cooking are announced as Aravind and Roshini.

The judges announce the elimination challenge as the "Coffee challenge" where the contestants must present one dish made with coffee.

The cooks present one dish from coffee after the allocated time. The judges appreciate the effort of the contestants.

The judges announce the eviction of the week as "Chutthi Aravind". He is a wildcard contestant who is moving out of the show within a couple of weeks.

All the cooks and comalis shower their love on him.

© Copyright tellybest.com, 2020, 2021. All Rights Reserved. Unauthorized use and/or duplication of any material from tellybest.com without written permission is strictly prohibited.
Cached Saved on: Sunday 2nd of October 2022 06:57:39 AMCached Disp on: Friday 7th of October 2022 09:06:48 PM