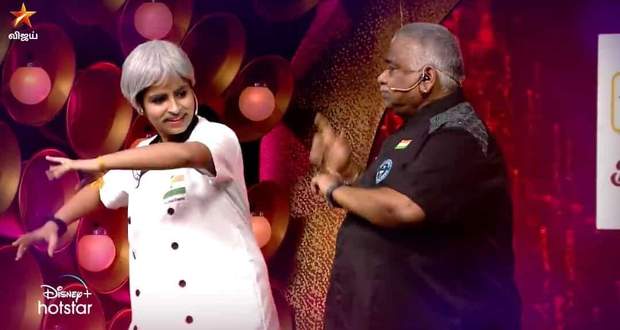 Cooku with Comali season 3 is a fun show telecasted on Star Vijay especially based on cooking where the celebrity contestants cook along with funny comalis.

The latest promo of Cook with Comali (23.4.2022) for the upcoming episode starts with Anchor Rakshan announcing the week as "Elimination week".

The cook and Comali pairing this week happens based on a pot-based doll challenge.

Each cook comes forward and selects a doll made of a pot and opens a picture present inside it. The corresponding comalis pair up with the cook.

The comalis this week are costumed in an unexpected manner. They depict the judges and contestants of CWC Season 3.

Kureshi exactly acts like Shruthika which impresses everyone on the sets of CWC.

To get to know more, download Cook with Comali Season 3 or watch full episodes online at Star Vijay on Saturday at 9.30 pm and Sunday at 9.00 pm and Disney+Hotstar.

Today's Cook with Comali 3 23rd April starts with the stunning entry of Anchor Rakshan. He introduces the week as "Elimination week".

The contestants share their insights about the show and all the memories on the sets of CWC3.

The comalis this week is costumed in an unexpected manner. They are found depicting the judges and contestants of CWC 3. Bharath as Grace Karunas, Sivaangi as Chef Dhamu, Manimegalai as Chef Venkatesh Bhat, Kureshi as Shruthika, Adirchi Arun as Rahul Thatha, Sunitha as Rakshan and Sarath as Manobala.

The cook and Comali pairing this week happens based on a Clown pot challenge.

A clown made up of a pot is placed on the table. Each cook comes forward and selects a clown made of a pot and opens it to find a picture hidden inside it. The images of the characters are present in the picture. The corresponding comalis in the costume pair up with the cooks.

The judges announce the first advantage task of the week as the "Bajji Challenge". The cooks and comalis must make and eat the bajjis made by them. They must make bajjis with onion, big chilli, potato and bread in the allocated time.

The cooks and comalis work with full effort to make the bajjis and complete eating them. Then the judges announce the winners of the first advantage task as Darshan, Santhosh Prathap, Roshini and Grace.

The winner of the advantage task is announced as Santhosh Prathap.