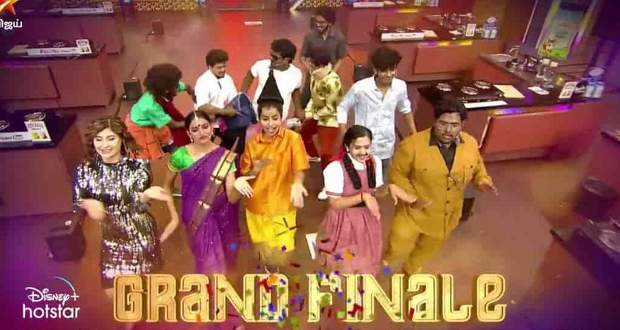 The latest promo of Cooku with Comali (24-07-2022) for the upcoming episode starts with anchor Rakshan introducing the “Grand finale of CWC 3”.

The comalis give a stunning entry in their most famous and trending costumes. Sivaangi as Vadivelu’s, Manimegalai as Reddin Kingsley, Sheethal as Teacher. The comalis costumes are admired by everyone.

A grand welcome is arranged for all the finalists of CWC3. The contestants enter with thunders of positivity and the comalis welcome them.

The next promo of CWC3 (24 July 2022) shows the cook with comali pairing based on a “High striker challenge”.

The first advantage task puts all the cooks and comali in a huge shock. It is an ice-based task where the cooks are found making chocolate bars.

All the contestants work efficiently by investing their complete effort to win the title of Cook with Comali 3.

Download Cook with Comali Season 3 or watch full episodes online at Star Vijay on Sunday at 3.00 PM, and Disney+Hotstar.

He then welcomes the comalis for the finale. The comalis appear in their famous costume of the season.

Anchor Rakshan and then welcome all the six finalists to the stage. They give a stunning entry.

The judges then give a stunning entry. They encourage and motivate the contestants to give their best.

The contestants and comalis share their insights about the show and share some funny memories of them from the show.

To make the finale more special Muthukumar and Rahul Thatha enter and support the finalists.

The cook and comali pairing happen based on a "Hammer hang challenge" where the comalis are tagged with number and the cook who hits that pressure will be their pair.

The cooks and comalis work efficiently to win the advantage task. Ammu Abhirami and Pugazh complete the task and present it in front of the judges.

The judges announce the winner of the advantage task as Ammu Abhirami.

The judges announce the first main task as a "combo task" where two ingredients are presented for cooking.

Ammu Abhirami uses her advantage against Vidyu Lekha and changes her ingredient to mushroom and mutton.

The judges announce the hindrance as a "triple hindrance task". The cooks must instruct the comalis with drawings depicting the ingredients.

The cooks stay in the hindrance task and instruct the comalis through drawings. The cooks put in more effort to present a wonderful dish and impress the judges.

The judges announce the second set of cooking.

The comalis enter in a grand costume for the second round. Anthony Dasan, Chutti Aravind, Roshini and Bala enter as special guests.

The judges announce the second main task as the "dream combo task".

The first hindrance is announced as the "monkey mask hindrance".

The second hindrance is the "hanging pillar hindrance".

The third hindrance is the "freeze hindrance".

The contestants must present two dishes to impress the judges by performing the hindrance task alternately.

The cooks stay in the hindrance task and instruct the comalis. The cooks put in more effort to present a wonderful dish and impress the judges.

The judges present all the six finalists with the momento

The judges announce the winner of Cook with Comali 3 as Shruthika. She receives a 5 lakh cash prize. She receives 1 lakh worth of kitchen appliances. She shares her experience, hardships and her journey in CWC3.

Her comali Pugazh receives a 1 lakh cash prize. He donates this money to the orphanage run by Bala.

The judges then announce the first runner-up of Cook with Comali as Darshan. He receives a 3 lakh cash prize. He receives 75,000 cash from Sakthi Masala and 5000 cash prizes from KAG tiles. He expresses his love for the show.

The second runner-up of CWC3 is announced as Ammu Abhirami. She receives special gift hampers. Her dad enters and they share some emotional moments.

All the comalis receive a special prize from Preethi. This makes them enthusiastic.

The cooks, comalis, judges and anchors end up teary-eyed. The bid an emotional farewell to everyone. 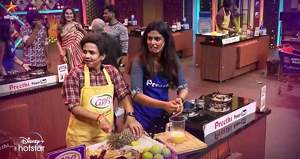 © Copyright tellybest.com, 2022, 2023. All Rights Reserved. Unauthorized use and/or duplication of any material from tellybest.com without written permission is strictly prohibited.
Cached Saved on: Wednesday 25th of January 2023 12:05:38 PMCached Disp on: Monday 6th of February 2023 06:31:12 PM