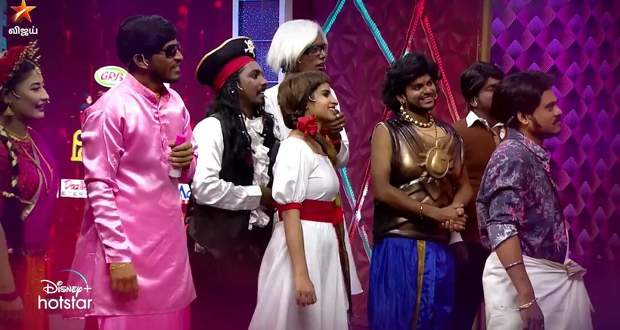 Cook with Comali Season 3 is a humorous television show that currently airs on Vijay TV and is designed to entertain viewers in a unique way through a cookery show.

The latest promo of Cooku with Comali (25-06-2022) for the upcoming episode starts with the stunning entry of comalis in a trending costume of their previous season.

Pugazh enters as Bahubali, Sivaangi as Annabelle, Sarath as Jack Sparrow and Bala as Raghuvaran.

The cooks of season CWC2 join the celebration club of CWC 3. Both the season's cooks join together for this round.

The next promo of CWC3 (25 June 2022) shows the judges announcing the cook and comali pairing as "Comali selection round". Comalis can select the cooks they wish to work with.

Sheethal Clarin for the first time selects to work with Darshan. Sunitha chooses to cook with Kani and Pugazh selects Pavithra.

The judges announce the first advantage task as "miniature cooking" where all are using small utensils to cook.

Today's Cook with Comali 3 25th June 2022 starts with the rocking entry of Anchor Rakshan. He enters with a stunning dance.

He announces the week as "Season 2 and Season 3 celebration round" where the contestants of Season 3 cook along with Season 2 contestants.

Rakshan welcomes the comalis to the show. The comalis appear in various famous costumes. Sivaangi as Annabelle, Pugazh as Maari, Sarath as Jack Sparrow, Kureshi as Vadivelu, Bala as Raghuvaran, Sunitha as street dancer, Sheethal as Post women, Adirchi Arun as Bahubali, Sakthi as Genie and Thangadurai as Harry Potter.

Rakshan then gives a special welcome to all the contestants of CWC2. Kani, Rithika, Pavithra, Deepa and Shakeela enter the sets of CWC3.

The contestants share their nostalgic experiences on the sets and they shower their love on the comalis.

The cook and comali pairing of the week happens based on a comali self-selection task.

Darshan pairs up with Sheethal Clarin.

Muthukumar is selected by Sakthi.

Vidyu Lekha is picked by Thangadurai.

Shruthika is chosen by Kureshi.

Rithika is chosen by Sarath.

Pavithra is picked by Pugazh.

Deepa is selected by Sivaangi.

The judges announce that this is going to be a combination cooking where contestants of season 2 and 3 cook together. The pairing of the cooks is based on the object selection task.

After the end of the pairing, the judges announce the first advantage task of the week as "Miniature cooking challenge".

The cooks must make small stuffed poli with the given flour and the comalis must make mini samosa with the small vessels. The one who presents the highest number will be declared the winner.

They then present the dishes for counting in front of the judges after the allocated time. The judges appreciate and applaud the endeavors of the contestants.

The winner of the first advantage task will be announced tomorrow.

© Copyright tellybest.com, 2022, 2023. All Rights Reserved. Unauthorized use and/or duplication of any material from tellybest.com without written permission is strictly prohibited.
Cached Saved on: Monday 21st of November 2022 06:40:38 PMCached Disp on: Saturday 3rd of December 2022 03:46:50 PM