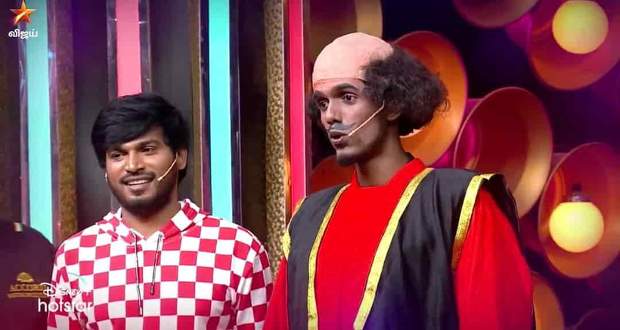 Cook with Comali  Season 3 is a humorous television show that currently airs on Vijay TV and is designed to entertain viewers in a unique way through a cookery show.

The latest promo of Cooku with Comali (29-05-2022) for the upcoming episode starts with the entry of comalis dressed up in cartoon characters.

Bala enters as Motu, Pugazh as Sakthiman, Sheethal as Harley Quinn, and Kureshi as Joker. All the cooks enjoy their entry.

The presence of Pugazh brings in waves of laughter on the sets of CWC3.

The new promo of CWC3 (29 May 2022) shows the judges announcing the first advantage task as the "Kuzhal Appalam Challenge".

The second advantage task is announced as the "Strawberry Eating Challenge" by the judges.

Today's Cook with Comali 3 29th May shows the cooks, anchor Rakshan and comalis dancing to the song "Pathala Pathala".

Anchor Rakshan then welcomes the contestants, comalis and judges to the show. The judges announce the winner of the advantage task as Grace Karunas.

Chef Damu announces the week as an immunity band challenge.

The judges then announce the main task as the "Thenaattu samayal challenge" where the cooks should use Sakthi masala to cook South Indian dishes.

The cooks must prepare the dish in three styles: Chettinad, Naanjil and KonguNadu.

The selection of the cooking style is based on a small task where the comalis come forward to break a box and find the chit inside denoting the style of cooking.

Grace uses her advantage for Shruthika and Ammu Abhirami.

The hindrance of the week is announced as the "Balancing hindrance" where the cooks must balance a water balloon on a skateboard.

The cooks balance the balloon on the skateboard and make so much fun with the hindrance task.

The cooks put in more effort to present a wonderful dish and impress the judges to win the immunity band.

The judges announce the winners of the main task as Grace, Ammu Abhirami, Muthukumar and Shruthika. These four contestants compete for the immunity band.

The judges announce the immunity challenge as the "Mukkani challenge". The contestants are asked to prepare 1 dish with Mango, banana and jackfruit given in 30 minutes.

The judges announce the winner of the immunity round as Muthukumar. He gets the immunity band and is free from elimination the next week. 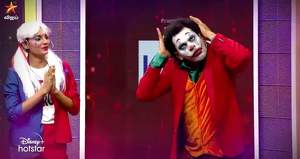 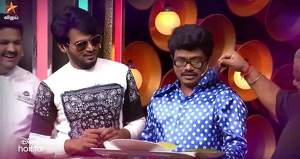 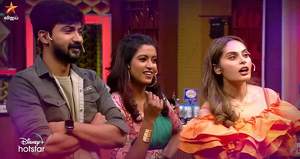 © Copyright tellybest.com, 2020, 2021. All Rights Reserved. Unauthorized use and/or duplication of any material from tellybest.com without written permission is strictly prohibited.
Cached Saved on: Wednesday 1st of June 2022 12:39:28 AMCached Disp on: Thursday 30th of June 2022 04:14:42 PM