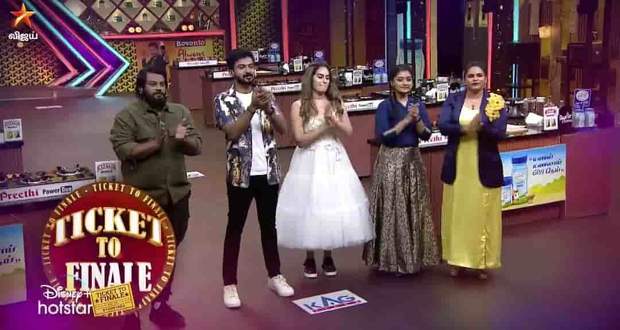 The latest promo of Cooku with Comali (02-07-2022) for the upcoming episode starts with Anchor Rakshan introducing the week as a Ticket to the finale round.

The contestants enter with enthusiasm and positivity to win the ticket to the finale and become the finalist of CWC3.

The comalis are found appearing in the characters of famous rowdies of Tamil cinema.

The next promo of CWC3 (2 July 2022) shows the entry of the special guest Parthiban to the show.

The contestants and comalis welcome him. He shares his insight about the show and promotes his upcoming movie Iravin Nizhal. He spends some quality time in the sets of CWC.

The judges announce the first advantage task as the "Groundnut Laddo challenge".

To get to know more, download Cook with Comali Season 3 or watch full episodes online at Star Vijay on Saturday at 9.30 PM, Sunday at 9.00 PM, and Disney+Hotstar.

Today's Cook with Comali 3 2nd July 2022 starts with the rocking entry of Anchor Rakshan. He enters and dances for the song Jalabula Jangu.

Anchor Rakshan announces the week as "Ticket to finale round". The winner of this round will directly participate in CWC3 finals.

The comalis appear in the costumes of famous antagonists of Kollywood this week.

The cook and comali pairing of the week happens based on a small task.

The task is the cooks must select a weapon which indirectly denotes the comali's character.

Darshan pairs up with Kureshi.

After the end of the pairing, the judges announce the first advantage task of the week as "Groundnut ladoo challenge".

The contestants must make ladoo with groundnut by grinding them with a manual grinder.

They then present the ladoo's in front of the judges.

The judges appreciate and applaud the endeavors of the contestants.

The judges announce the winner of the first advantage task as Shruthika and Muthukumar.

They then announce the second advantage task as a “Quiz challenge”.

Muthukumar and Bala score more in the task.

© Copyright tellybest.com, 2022, 2023. All Rights Reserved. Unauthorized use and/or duplication of any material from tellybest.com without written permission is strictly prohibited.
Cached Saved on: Monday 21st of November 2022 11:26:50 AMCached Disp on: Friday 2nd of December 2022 02:47:24 PM