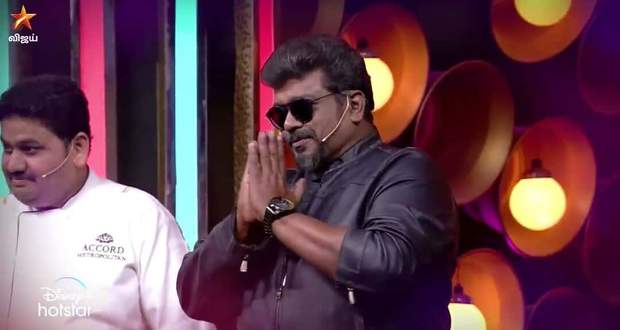 The latest promo of Cooku with Comali (03-07-2022) for the upcoming episode starts with the stunning entry of the contestants on the sets of CWC.

Anchor Rakshan announces the week as a Ticket to the finale round where one contestant can directly become the finalist of CWC.

The next promo of CWC3 (3 July 2022) shows the entry of special guest Parthiban. He speaks about his upcoming movie Iravin Nizhal.

The comalis are appearing in the costume of famous Dons of Kollywood. The pairing task is based on weapon selection.

Bala appears in the costume of Santhanam, the villain of the Vikram movie. His performance is enjoyed by everyone.

Download Cook with Comali Season 3 or watch full episodes online at Star Vijay on Saturday at 9.30 PM, Sunday at 9.00 PM, and Disney+Hotstar.

Anchor Rakshan then welcomes the contestants, comalis and judges to the show. The judges announce the winner of the advantage task as Muthukumar.

Chef Damu and Venkatesh Bhat announce the importance of ticket to finale round.

The anchor announces the entry of the special guest Parthiban to the show, he shares his insights about CWC.

He then gives a talk about his upcoming movie "Iravin Nizhal". The judges, contestants and comalis wish him all success.

The judges then announce the main task as the "plant-based challenge" where the cooks must cook something related to a plant, climber or tree.

The selection of the plant, climber or tree ingredients is based on a small task where the comalis come forward and select the ingredients.

Muthukumar uses his advantage against Shruthika and Darshan.

The hindrance of the week is announced as a "block lifting hindrance" where the cooks are found lifting blocks during the cooking time.

The cooks are found cooking with hindrance. The cooks put in more effort to present a wonderful dish.

The judges announce the winner of the main task as Shruthika. She directly enters the finale of CWC3. She is the first finalist of Cook with Comali 3.

Muthukumar, Darshan, Vidyu and Ammu Abhirami are expected to compete in the semi-finals next week.