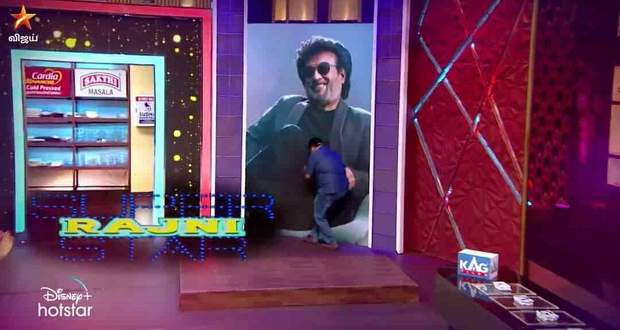 Cook with Comali Season 3 is a hilarious cooking show that is presently telecasted on Vijay TV. It is intended to amuse audiences in a special manner through a cooking show.

The latest promo of Cooku with Comali (04-06-2022) for the upcoming episode starts with the judges announcing the week as "Elimination round".

The comalis enter in the costumes of "Super Star Rajni" representing different movies. All the cooks and comalis get excited over the comalis entry.

Manimegalai enters the set of CWC in the "Baasha Rajni" costume which is admired by everyone. She makes fun of Grace and Vidyu.

The next promo of CWC3 (4 June 2022) shows Kureshi entering in the costume of "Annamalai Rajni".

He enters with a bicycle which is made fun of by everyone. He pairs with Ammu Abhirami this week.

He takes Ammu Abhirami on a ride on his bicycle, filling the set in laughter.

Today's Cook with Comali 3 4th June starts with the rocking entry of Anchor Rakshan. He enters and dances for the song "Mass Maranam".

The comalis appear in the costumes of famous characters of Super Star Rajnikanth this week. Adirchi Arun as Thalapathi Surya, Manimegalai as Baasha, Bala as Alex Pandian, Kureshi as Annamalai, Bharath as Chandramukhi Vettayan, Sunitha as Petta Rajni.

Anchor Rakshan then welcomes the cooks and judges to the show. They give a stunning entry onto the sets.

The cook and comali pairing of the week happens based on a small task. The task is to choose a lot and solve a puzzle and the puzzle reveals the picture of Rajni's character. The comali in that character will appear to pair with the contestant.

Darshan pairs up with Manimegalai.

Kureshi takes Ammu Abhirami for a ride on his bicycle. Bala takes his cook Vidyu on a bicycle ride.

After the end of the pairing, the judges announce the first advantage task of the week as the "Thaenmittai challenge".

The cooks and comalis make thaenmittai with the provided flour and the one who presents the highest number of candies will be declared the winner.

Both cooks and comalis work alternately and try to make many numbers of thaenmittai.

They then present the thaenmittai in front of the judges for counting. The judges appreciate and applaud the endeavours of the contestants.

The judges announce the winner of the first advantage task as Ammu Abhirami, Vidyu Lekha and Grace Karunas.

They then announce the second advantage task as the “Pantry Challenge”.

The cooks and comalis must bring the ingredients from the pantry from the list provided by the judges. The one who brings the highest number of ingredients will be the winner of the advantage task.

Sunitha and Kureshi are yet to perform their second advantage task. 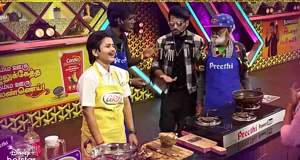