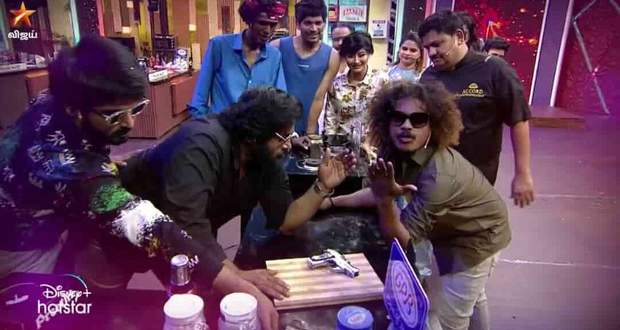 The latest promo of Cook with Comali (07.5.2022) for the upcoming episode starts with the stunning entry of people's favourite comali Pugazh.

He enters the sets of CWC 3 in the costume of Vijay Sethupathi. Everybody gets excited over his entry and welcomes him.

All the comalis are in the costume of famous Kollywood characters, making the episode more exciting. Sivaangi as Pokkiri Vijay, Bala as Baba Basha, Manimegalai as Singam Surya and Kureshi as Maan Karate Siva Karthikeyan.

The cooks and comalis are performing the task efficiently by making the chapatis and omelettes. The one who presents the highest number of Chapati and omelette will be declared the winner.

Today's Cook with Comali 3 7th May starts with the stunning entry of Anchor Rakshan. He enters and dances for "Mangai".

He then welcomes the cooks and judges to the show. They give a rocking entry onto the sets.

The cook and comali pairing of the week happens based on a small object selection task. The objects are directly linked to the comalis costumes.

After the end of the pairing, the judges announce the surprise entry of Pugazh. Everyone gets amazed and surprised by his entry and welcomes him.

He arrives in the costume of Soothu Kavvum Vijay Sethupathi. The judges announce that he will be pairing with Aravind for the first half of cooking as Aravind chose Vijay Sethupathi's character.

Pugazh makes so much fun in the sets and everyone enjoys his presence. The judges enquire about his shooting schedules.

He then goes on an arm-wrestling duo with the wildcard contestant Muthukumar. They go on a fierce battle.

This hurts the hand of Pugazh and everyone enjoys his comical reactions. Chef Damu comes to his aid and makes it more fun.

The judges then announce a new twist that Rakshan will enter as a contestant to cook this week. Rakshan pairs up with Bharath and enters the cooking station.

The judges announce the first advantage task of the day as the “Iron box cooking challenge”. Here the cooks and comalis must make chapati and omelette in an iron box. The one who presents the highest number of Chapathis and omelettes will be declared the winner.

The cooks and comalis work efficiently to win the first advantage task. They make so much fun while cooking with the iron box.

They then present the chapatis and omelettes to the judges for counting. The judges appreciate everyone for their effort.

The judges announce Vidyu Lekha, Roshini and Muthukumar as the winners of the first advantage task.

The judges announce the second advantage task as the "Potato peeling challenge" where the cooks and comalis must remove the peels of boiled potato. The one who does this first will be declared the winner of the advantage task.

The three teams put in more effort to win the advantage task. Roshini and Bala finish the task first.

The judges announce the winner of the advantage task as Roshini.