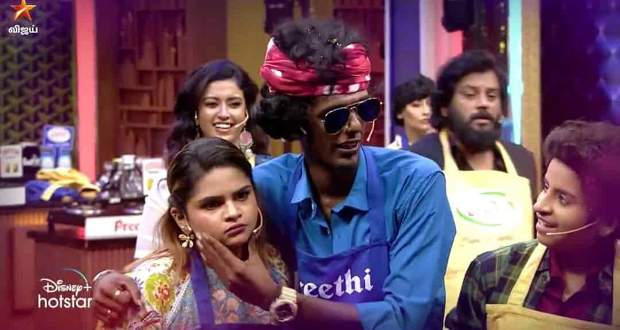 The latest promo of Cooku with Comali (08-05-2022) for the upcoming episode starts with the entry of all the comalis in stunning costumes of famous Tamil cinema characters.

To everyone's surprise, Pugazh enters the sets of CWC3 in the costume of Soothu Kavvum Vijay Sethupathi.

The next promo of CWC3 (8 May 2022) shows Pugazh doing arm wrestling with the wildcard contestant Muthukumar.

They make so much fun on the sets. Chef Damu comes to support Pugazh when he hurts his hand during the game. The cooks and comalis make chapati and omelette with an iron box.

The judges announce the first advantage task as an "Iron box challenge".

Anchor Rakshan then welcomes the contestants, comalis and judges to the show. The judges announce the winner of the advantage as Roshini and Bala.

The judges announce the main task of the week as the "Traditional Rice challenge".

They present three different types of traditional rice for the contestants to cook. The selection of the rice is based on a small clay throw task.

Sunitha and Muthukumar get White rice.

Darshan and Kureshi get Kerala rice.

Roshini uses her advantage against Grace Karunas and gets white rice from her.

The hindrance of the week is announced as "Uppu Karuvadu hindrance". The cooks and comalis must balance the stick between them.

The judges announce the commencement of the task. All the cooks and comalis grab their ingredients and work efficiently to win the immunity band.

The hindrance task puts the entire set in waves of laughter. The contestants and comalis make so much fun balancing the stick.

The judges make so much fun with the cooks and comalis by disturbing them during the task.

Rakshan, Bharath and Adirchi Arun make a special cooking task and present Biryani which is appreciated and tasted by the other comalis and cooks.

The judges make the final countdown and all the cooks present their dishes in front of the judges.

The judges appreciate everyone for their effort, creativity and their improvement in the standard of cooking.

They then announce the winners of the main task as Roshini, Darshan and MuthuKumar.

These three teams enter the immunity challenge cooking and the cooking task is announced as the "Chilli challenge".

The cooks must present one dish made with the main ingredient as Chilli. The cooks, comalis along with the judges make so much fun with the chilli challenge.

The contestants present their dishes in front of the judges. The judges appreciate their effort and creativity.

He announces that the next week will be an immunity band round and this week is neutralized.

Based on the main task, the cook of the week is given to Dharshan.