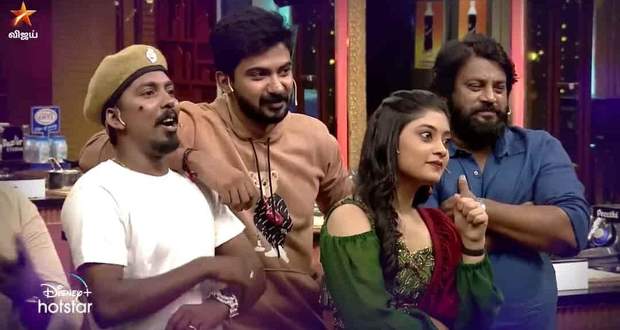 The latest promo of Cook with Comali (09-07-2022) for the upcoming episode starts with anchor Rakshan announcing the week as a "Semi finale round".

The four contestants Darshan, Vidyu, Muthukumar, and Ammu Abhirami compete to become the finalist of CWC3.

Chef Dhamu announces the cook and comali pairing of the week as "Double pairing" where two comalis pair with a cook.

The next promo of CWC3 (9 July 2022) shows Darshan pairing with Bharath and Adirchi Arun. Ammu Abhirami pairs with Bala and Manimegalai.

The comalis appear in funny costumes which everyone enjoys.

The judges announce the first advantage task as the "Bottleguard cutlet challenge" where the cooks and comalis must make cutlets with Bottleguard and present them for counting.

Today's Cook with Comali 3 9th July 2022 starts with the rocking entry of Anchor Rakshan. He enters and dances to the song Kutty Pisasu.

The contestants are found nervous as chef Dhamu announces the week as the semi-finals round. This is regarded the deciding week.

The comalis appear in the double damaka costumes this week. Bharath and Adirchi Arun as, Sunitha and Sheethal as twin Aishwarya Rai from Jeans, Bala and Manimegalai as Vadivelu and his sister, Sivaangi and Rakshan as Mithra and Joseph from Theri.

The cook and comali pairing of the week happens based on a small task. The judges announce the double comali pairing. The task is to select a twin doll that signifies the comalis.

Darshan pairs up with Bharath and Adirchi Arun.

After the end of the pairing, the judges announce the first advantage task of the week as "Bottleguard cutlet challenge".

The cooks and comalis put in more effort to win the advantage task. They then present the cutlets in front of the judges for counting.

Chef Dhamu appreciates and applauds the endeavours of the contestants.

He then announces the winner of the first advantage task as Ammu Abhirami and Vidyu Lekha.

They then announce the second advantage task as the “Dumb Charades challenge”.

The judges announce the winner of the advantage task as Ammu Abhirami.

Rakshan then announces the entry of the special guest Deva Dharshini. All the Cooks and comalis welcome her.

Chef Dhamu and Deva Dharshini then announce the main task as "Contestant selection challenge" where the co-contestants decide the ingredients for their opponents.

Each contestant chooses one toughest dish for their competitors. The judges reveal the ingredients chosen by their opponents. This shocks everyone on the sets of CWC3.