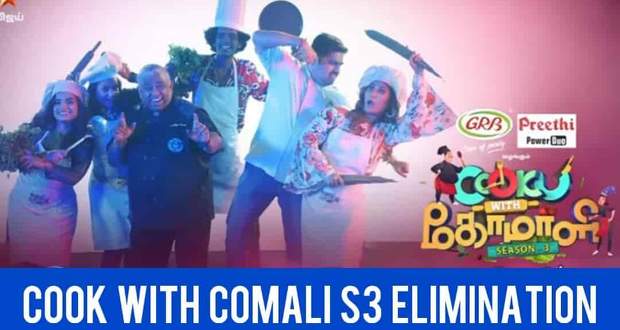 Star Vijay's Cooku with Comali 3 is the ultimate fun-filled Cookery show. The innovative concept of the show has gained a massive response from viewers of all ages.

In this show, these 10 contestants compete with each other to impress the chefs(Judges) with presentable dishes.

Scoring happens by the Chefs based on the dishes served and one with the least score is removed from the show.

Eliminated contestants are served with an opportunity to showcase their talent in the wild-card round.

On 17th July 2022, Santhosh Prathap and Grace Karunas are announced as the finalists of CWC3. Being a  wildcard round, both exhibited wonderful cooking which impressed the judges to the maximum. The other wildcard contestants bid their farewell to CWC3.

On 10th July 2022, Ammu Abhirami, Vidyu Lekha and Darshan enter the finale of CWC3 as finalists. They presented wonderful dishes that impressed the judges and took them directly to the finale. Muthukumar is eliminated from Cook with Comali 3 and will participate in the wildcard round next week.

On 3rd July 2022, Shruthika becomes the winner of the main task and gets her ticket to finale. She presented an extraordinary dish that impressed the judges and made them give her the ticket directly without face-off cooking. She becomes the first finalist of Cook with Comali 3.

On 19th June 2022, Roshni gets evicted from Cook with Comali 3. She being a sportive and friendly contestant fails to reach the Top 5 of CWC3. The co-contestants and comalis get emotional over her exit. The judges encouraged her to be a part of the wildcard round.

On 12th June 2022, Shruthika becomes the winner of the immunity band. She is free from elimination in the upcoming week. The judges also announce her as the first Top 5 contestant of CWC3.

On 5th June 2022, the judges announce the elimination of Grace Karunas. She, being one of the fine and toughest competitors in the show fails to impress the judges this week. The entire set of CWC 3 was drowned in tears on her elimination. All the cooks and comalis shower their love on her and bid her a farewell.

On 22nd May 2022, Chutti Aravind gets evicted from Cooku with Comali 3. He entered CWC3 as a wildcard contestant and grabbed the hearts of the cooks and comalis in a short span of time. He exits the show after sharing his experience in CWC.

On 15th May 2022, Muthukumar was announced as the cook of the week.

On 24th April 2022, unexpectedly, Santhosh Prathap gets evicted from the show. He, being the most charming and friendly contestant on the show fails against Ammu Abhirami in the elimination cooking challenge. Everyone bid him an emotional farewell.

On 16th April 2022 and 17th April 2022, Manimagalai announces the week as Immunity week. Vidyu Leeka wins the immunity band and is safe from elimination in the next week.

On 20th March 2022, Anthony Dasan gets evicted from today's Cook With Comali show. Although being a funny and talented contestant, he failed to impress the judges in both the main cooking challenge and also the elimination challenge which resulted in his ejection from Season 3 of Cooku with Comali.

On 6th March 2022, Chef Venkatesh Bhat announces the eviction of Manobala from Cook with Comali 3. The popular cook gets the least score and exited from the show.

On, 13th February 2022, Rahul Thatha becomes the first contestant of CWC3 to get eliminated. Chef Venkatesh Bhat announced his elimination.

The below table shows the 10 contestants of Season 3 of Cooku With Comali Elimination/Ongoing status:

Every week the table will be updated with the eliminated contestants with respect to the Cook with Comali 3 episodes.