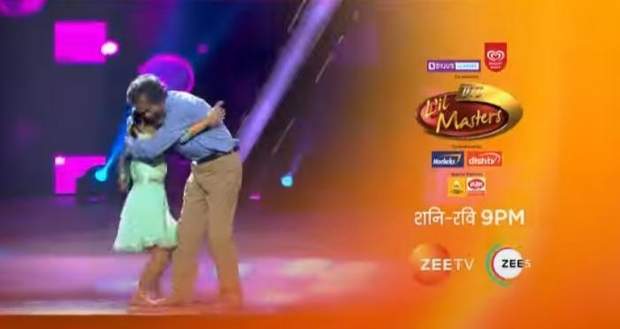 The recent promo of DID Lil Masters 5 (11-06-22) for this weekend episode shows Appun giving a very emotional performance with her grandfather.

Seeing Appun and her grandfather bonding, everyone on the judging panel is stunned.

Bosco then says God cannot arrive directly in our life that's why he sends Grandparents into our life.

One of the other promos also shows Nobojit and Sagar giving a phenomenal performance which stuns everyone.

Even Remo comes to the stage to kiss their feet as a sign of gratitude.

The latest promo of DID Little Masters 5th season for this weekend (11 June 2022) shows Remo, Sonali and Shilpa dancing to her killer song with the Nikama movie cast.

After the performance, Shilpa and Nikama's movie cast make a gorgeous entry into the set.

Further, Aadhyashree from tram Vaibhav arrives at the stage dressed like Munna Bhai

Aadhyashree then asks Shilpa for a solution for her mom's chubbiness.

Hearing this, Shilpa laughs awkwardly and says that her mom needs yoga. She even gifts Aadhayshree some fresh vegetables from her garden.

Jay then shows a video of all the little masters cleaning Juhu beach and seeing this everyone praises them for it.

Further, Rishita from tram Vaibhav gives a sizzling performance which amazes everyone.

As expected, she gets a golden buzzer from the judges.

Later Shilpa asks Rishita to teach her and Nikhama casts the dance moves and she agrees.

Even Robembo flirts with Shilpa by claiming that Shilpa has awakened his heart with her charms.

After that, Aarav from team Paul and Appun from team Vaibhav give a killer performance.

After the performance, Appun asks Shilpa to perform the Dhadkan movie song with her grandpa.

Shilpa agrees and their act makes everyone laugh.

To continue the show, Sagar from the team Paul performs freestyle dance form on Alvida song.

His performance impresses everyone and to give KK tribute everyone maintains two minutes of silence.

Shilpa even gifts Sagar a saree for his mother which makes Sagar very emotional.

Later Sadiya and Mansi from team Vartika give a unique performance that showcases the difference between water and fire which stuns everyone.

Remo tells Varitka that she has done a very good job in portraying the water and fire.

Later Nobojit is announced as performer of the day.